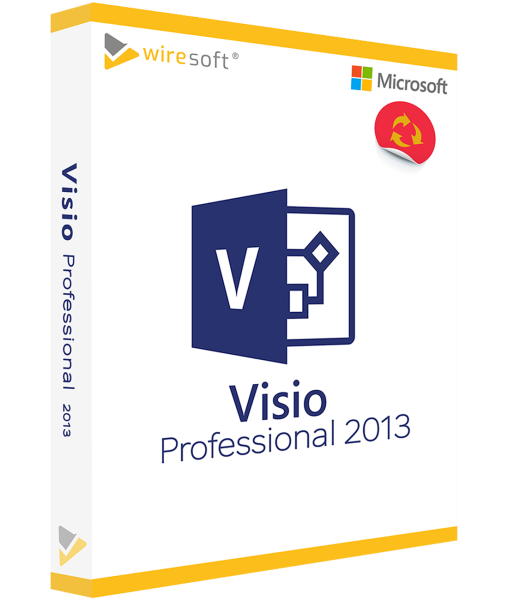 Visio Professional 2013 is the most comprehensive edition of this Microsoft program version of Visio; it not only contains considerably more templates for the professional creation of diagrams, but also has exclusive functions that make the application easier and simpler: for example, with Visio Professional 2013 certain diagram types can be linked to Excel tables and data can be imported directly into shapes; in addition, frequently used building blocks of diagrams are available even more directly via the Quick Shapes.

All diagram types available in Visio 2013 are clearly arranged in thematically grouped templates for the individual application areas, and can be supplemented with the respective assigned shapes via drag & drop as well as filled with text or visually edited.

Users of Office programs will also quickly find their way around Visio 2013 Professional, as the desktop interface of the program is similarly structured, and the integrated tools can be used just as intuitively here, so that diagrams can be easily adapted and edited.

For which user groups is the Visio 2013 Professional edition intended?

The Professional edition of MS Visio 2013 offers a maximum of functions as well as diagram types, so that sophisticated visualizations can be created for the most diverse areas of application - at a professional level, which is required especially in large companies and organizations.

A great advantage of Visio 2013 Professional as well as the other editions is their great compatibility with other Microsoft applications: in terms of operating systems, it ranges from Windows 7 to Windows 10. Visio 2013 Professional is therefore particularly attractive for those users who have not yet made the switch to a newer operating system or are avoiding this step, so that the use of the Visio software in the 2013 version is also possible without an update, if necessary.

This professional edition of Microsoft Visio 2013 is offered in Wiresoft's software shop as a single license in the purchase version - it is used software that arises when a volume license is dissolved. Used software licenses from Wiresoft have a significantly lower price compared to new software, making them an affordable way for many user groups to use a Microsoft software like Visio 2013.

In addition, buyers can also find many other Microsoft programs in the Wiresoft Software Online Shop, e.g. Windows operating systems, in versions compatible with Visio 2013 - as inexpensive used software single licenses. The following overview presents the most important features and tools of Visio 2013 Professional Edition.

Visio 2013 Professional has a much larger range of diagram templates as well as particularly practical functions that make creating as well as filling diagrams even faster and easier:

The Quick-Shape function speeds up the creation of diagrams and thus offers practical support especially for those users who frequently work with Visio 2013 Professional. With Quick-Shape, they can change the order of shapes within a template and drag them to a specific position, e.g. put the most frequently used shapes at the top of the shape list so that they are immediately available. These can also be displayed using the mini toolbar for shapes by cursor and the Auto Connect function.

Exclusive to the Professional Edition of Visio 2013 is the feature to import data from an external source into one or more shapes. Since the most common external data source is Excel, a quick import function is available for this purpose. In this process, a row is linked to the respective data or assigned to a specific shape. After the data import, so-called data graphics can be applied to this shape, e.g. colored labels for certain values or also labels. These can be changed, moved or the imported data contained therein can also be updated.

Alternatively, user-defined import from a data source is also possible. The imported data can be displayed in Visio 2013 Professional in a separate "External data" window.

The Visio Professional 2013 edition offers the largest range of Standard- and special diagrams suitable for visualizing structures and processes as well as plans in most business areas. These include the many different types of flowcharts, which can be used to represent not only technical processes and procedures - data flowcharts for system representations, process flowcharts for chemical engineering - but also typical business areas such as workflow and business process modeling diagrams.

Also included are many diagrams according to UML-Standard (Unified Modeling Language), which are mainly used in software development, with class and component diagrams for system structures and components, deployment and sequence diagrams for runtime systems and their elements, as well as database notation, use case and communication diagrams, etc.

All templates available in Visio Professional 2013 can be edited using the respective Standard shapes as well as self-created shapes, and the resulting diagrams can be saved back as templates.

A major advantage of Microsoft Visio 2013 Professional is the visual orientation to the Office programs, making the desktop view immediately familiar to users. In addition to the Professional functions already mentioned, Visio 2013 offers further innovations compared to the previous version:

The structure of the diagrams available in Visio 2013 Professional

Visio 2013 Professional is organized and structured like a construction kit, allowing users to quickly find their way around. There are the following 3 levels:

Shapes represent the basic elements, i.e. the components that make up a diagram. They are grouped together in the stencils. When creating or editing a diagram, a shape is dragged as a copy onto a new or existing drawing sheet. In contrast to shapes, the copies in Visio 2013 are referred to as instances.

The instances or copied shapes can then be edited using their selection points - they can be rotated, changed in width and height or scaled, color, line thickness or contour can be changed and finally data or text can be inserted.

A certain group of shapes is grouped together in so-called templates, which typically make up a certain diagram type and can also be contained several times in different templates. As a result, the appropriate set of shapes is available in each diagram type in Visio 2013 Professional.

To create a diagram, users can either open a corresponding template that contains a suitable Standard diagram and adapt or fill it, or design their own diagram using the available shapes.

Such self-created diagrams as well as any other standard diagram edited in Visio 2013 Professional can be saved and are available again when the program is opened again.

Visio files have their own extension .vsd, but they can also be used in other Microsoft programs, for example as part of a presentation in PowerPoint. Users should be aware that a file created with Visio Professional 2013 is not compatible with a more recent Office program.

Important note: The Visio 2013 version - also the Professional Edition - is not compatible with Microsoft Office 2016!

This MS Visio 2013 Professional Edition is available in the Wiresoft online shop in the form of a single-user license at a particularly low price in the form of used software, because here the price is significantly lower than comparable new goods; in addition, in the usual trade buyers usually find only the latest software version of Visio. This is often a subscription version with corresponding contractual obligations and updates that are subject to a charge. In addition to the lower purchase price, the purchase version offered by Wiresoft therefore also offers the advantage of unlimited usability.

Basic information about used software from Wiresoft: The single-user license of Visio Professional 2013 Edition offered here originates from a volume license of the Microsoft program, which was first purchased and often used by an authorized company. Within the scope of the legally permissible resale or acquisition by Wiresoft, this was split into individual licenses, which were thereby marked as used software. Neither the dissolution of the volume license nor the labeling as "used software" results in any restrictions on the functional scope or the usability of Visio 2013 over time - and this not only because software does not wear out, but above all because no valid regulations are violated by the described processes.

Furthermore, all of the used software licenses offered, such as the Professional Edition of Microsoft Visio 2013 in this case, originate from companies for which the valid case law applies to the associated business transactions, which clearly states that trading in used software is permitted by law. This fact has already been clearly confirmed by various court rulings, which means for you as a buyer that, on the one hand, a liability risk is reliably excluded and, on the other hand, the software purchased by you is also audit-proof due to complete proof of all purchases or sales on the part of Wiresoft.

Ergo: Buying software with Wiresoft is always a safe business for you as a customer, which offers you only advantages! When buying a used software license of Visio 2013 Professional - or any other Microsoft program - you benefit not only from the great price advantage compared to new goods, but also from the buyer security through the instant download and immediate license activation with the volume license key valid exclusively for the application you have purchased. Wiresoft's used software offer therefore gives you the chance to use such exclusive Microsoft program editions yourself.

In the Wiresoft shop for Microsoft used software, you will find not only this Visio Professional 2013 edition, but also other versions or editions of this program, and many other Microsoft applications, many of which are compatible with this program version, such as Windows operating systems and Windows server operating systems. If you have any questions about MS Visio Professional 2013 or any other Microsoft software available in Wiresoft Shop, just contact us and ask for competent and friendly advice - via chat, phone or e-mail.