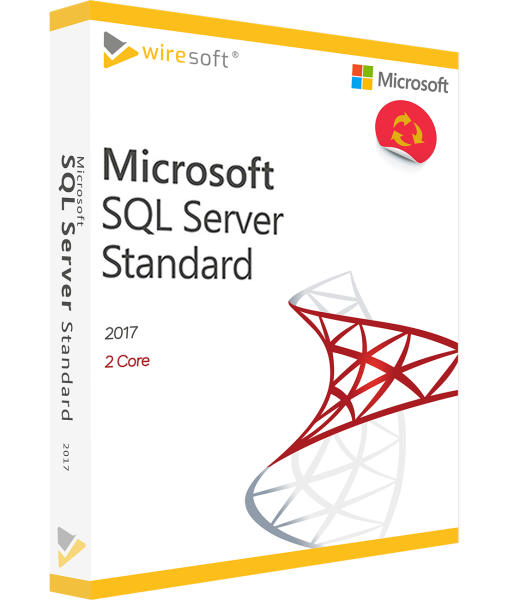 The edition SQL Server 2017 Standard  offers with its included database, reporting and analysis functions especially smaller and medium-sized companies a powerful version of the proven relational data platform from Microsoft. It includes many enhancements and improvements to existing features, including Master Data Services and Reporting Services, as well as important new features, including Business Intelligence and Always Encrypted technology - plus high scalability to run mission-critical workloads securely and reliably.

With its included database, reporting and analysis functions, the SQL Server 2017 Standard edition offers small and medium-sized companies in particular a powerful version of Microsoft's proven relational data platform. It includes many enhancements and improvements to existing features, including Master Data Services and Reporting Services, as well as important new features, including Business Intelligence and Always Encrypted technology - plus high scalability to run mission-critical workloads securely and reliably. With SQL Server 2017 Standard, gain new insights based on your data with in-database advanced analytics in Python or R, as well as powerful interactive visualizations. Add to that the choice of development languages and operating systems, and you can deploy SQL Serve applications not only to Windows, but also to Linux and Linux-based Docker containers - as well as between running them locally or in the cloud.

SQL Server Standard 2-Core Edition thus meets all the requirements of a modern high-performance relational database management system, as they are typically given in particular in SMEs when providing ERP software, CRM as well as enterprise resource planning systems - Microsoft SQL Server contains all the prerequisites for a secure platform for data warehousing.

Wiresoft offers the SQL Server 2017 Standard 2-Core edition as used software - at a significantly lower price than new software - this is fully usable and offers a large scope in terms of performance and security, as this is attractive especially for such companies or organizations that use correspondingly more powerful servers, so that the variant consisting of server license/CAL is not applicable. The licensing of Microsoft SQL Server 2017 Standard is also carried out for used software according to the Microsoft license management. For detailed information on the applicable licensing terms as well as the feature sets included in SQL Server 2017 Standard, please refer to the details below.

The Standard edition of SQL Server 2017 offers a wide range of features needed to run mid-tier applications and data marts in smaller or mid-sized companies - including high scalability that also allows for their trouble-free performance. In addition to high virtualizability, this includes high availability with failover, advanced OLTP and in-memory columnstore, as well as operational real-time analytics and PolyBase. PolyBase technology also allows relational data and Big Data to be combined and thus used in a variety of ways.

The Business Intelligence features provide multi-dimensional models and basic tabular models for analyzing data sets, as well as in-memory storage mode, basic reporting and analytics features. For Advanced Analytics, SQL Server Machine Learning Services supports integration of machine learning features, including connectivity with open source Python and -R, provides a consistent environment not only on Windows, but also for Linux and Docker, as well as also hybrid transactional as well as analytics processing in real time.

Further, SQL Server 2017 Standard supports many common development tools both on-premises and in the cloud, including T-SQL and SQL CLR. In addition, the Standard edition also offers enhanced security with Always Encrypted, including Always On high availability and disaster recovery for Windows as well as Linux.

In addition to increased performance, the database engine includes additional features for complex analytics and improved workflows, including adaptive query processing with enhancements for Adaptive Joints and feedback on memory allocation in batch mode. Overlapping execution of table value functions with multiple statements conserves CPU resources, while new dynamic management lists increase performance, including automatic optimization; when query performance problems occur, they are immediately displayed, and appropriate suggestions for resolution are created and automatically implemented. In addition, CLR assemblies can now be added to a positive list.

The Scale Out feature in SSIS includes enhancements and simplifies running on multiple PCs, for example. The Scale Out master supports high availability and optimizes failover handling of execution logs. The SSIS catalog includes another global property to specify the default mode when deploying SSIS packages, plus SQL Server on Linux is now supported.

The area previously known as SQL Server R Services has been renamed SQL Server Machine Learning Services, in part because of support for Python alongside the previous R programming language. Now, R or Python scripts can be used for execution; Microsoft Machine Learning Server can be installed to deploy R and Python models. Developers also have access to ML and AI libraries for Python, which are available in an open source environment.

Below is a brief overview of performance and included features. The Standard Edition of Microsoft SQL Server supports a maximum number of 24 cores and a maximum database size of 524 PB. Furthermore, the following information on maximum limits and available features applies in each case:

The following specifications apply here for the Standard Edition:

Other specifications and notes

The following specifications apply when installing the Standard 2-Core edition of MS SQL Server 2017, these are required to ensure optimal operation.

For the SQL Server 2017 Standard edition, the core licensing introduced by Microsoft with the 2016 SQL Server version is alternatively available, as described below. In contrast to earlier versions, where the number of cores of a processor did not play a role in licensing, a different licensing metric applies: The number of cores contained in an SQL Server now forms the basis for determining the license requirement. For this purpose, 2-core packages are then available; two cores can thus be licensed per package; this also applies to used software.

The total number of licenses required for an SQL Server is therefore based on the maximum number of cores, with each physical core of a server requiring its own license. Microsoft basically assumes a minimum of 8 licenses per server and has defined the following conditions:

If you have any questions about your correct licensing with SQL Server 2017 Standard 2-Core, please feel free to contact us.

The products offered by Wiresoft as used software with SQL Server 2017 Standard 2-Core do not differ from a new server license - not only because software does not wear out, but also otherwise in terms of usability. Below Wiresoft answers all typical questions about used SQL Server licenses:

Where does the used SQL Server 2017 Standard 2-Core software come from?

The SQL Server 2017 Standard 2-Core used software offered by Wiresoft comes from those companies that purchased it new themselves and then resold it to Wiresoft. With their offer in Wiresoft Shop, this is marked as used software, but it can be used like a new license.

Yes: Wiresoft used software such as SQL Server 2017 Standard 2-Core offers you as a customer the same advantages as the corresponding new server software: buyer security through the immediate download after your successfully completed purchase as well as the immediate license activation with the supplied valid license key.

Are both purchase and use of SQL Server 2017 Standard 2-Core pre-owned software legal?

Yes: At Wiresoft, you can be confident that you, as a customer, are not violating any laws either when purchasing SQL Server 2017 Standard 2-Core used software or when actually using it, because the used software offered comes from a company's license inventory. In this case, the valid jurisdiction not only allows trading with Microsoft used software, but also its use; this has been confirmed several times by various court rulings.

Does used software from Wiresoft such as SQL Server 2017 Standard 2-Core have any other advantages?

Used software from Wiresoft offers many customers an economic advantage, as they can use it to update their software inventories much more cheaply in order to be up to date than with corresponding new software. In addition, they can also find older versions of server licenses that are no longer regularly offered. In addition, used software from Wiresoft also offers audit security through the complete proof of all buyers!

At Wiresoft you will not only find the SQL Server 2017 Standard 2-Core edition as inexpensive used software, but also the Standard edition with Server/CAL licensing as well as other editions of SQL Server 2017, and also newer versions of Microsoft SQL Server. The Wiresoft used software portfolio also includes many other Microsoft programs - with all the benefits mentioned above. If you have any questions about your core-based licensing of SQL Server 2017 Standard or any other edition, please feel free to use our expert advice via chat or email or phone.