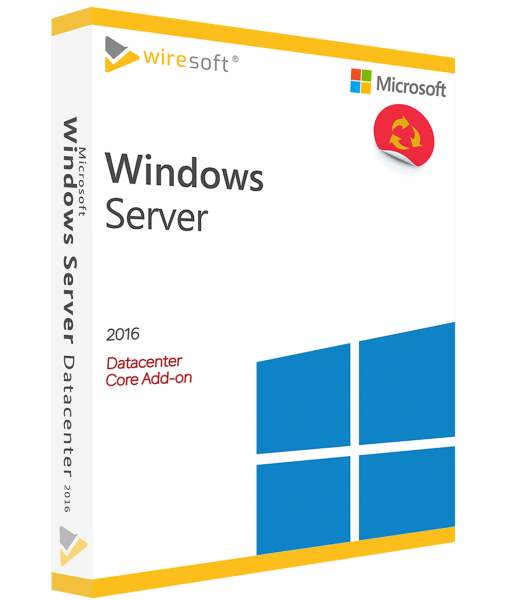 Windows Server 2016 2 offers all the requirements to fully meet the demands of large organizations and enterprises for a high level of virtualization in terms of the used and the provided; it is the version of 10. The 16 package forms the basis for the licensing with the edition. Datacenter Core Server Services Server Windows Core Server Datacenter

Windows Server 2016 Datacenter offers all the prerequisites to fully meet the demands of large organizations and companies for a high degree of virtualization in terms of the Server used and the Services provided; it is the Server version of Windows 10. The 2-Core package forms the basis for Server licensing with the Datacenter edition.

With Windows Server 2016 Datacenter, companies receive a reliable Server operating system with many powerful technologies and functions that support the virtualization of applications. Compared to the previous version, this Datacenter edition offers many enhancements and optimizations as well as many new exclusive features that also ensure better security of network infrastructures through increased stability and optimized protection against failures, etc. Due to the familiar interface from Windows 10, the use of Windows Server 2016 Datacenter is almost intuitive.

What does Windows Server 2016 offer in the Datacenter edition?

A key decision criterion for purchasing the Windows Server 2016 Datacenter Edition is the ever-increasing need for virtualization to develop and operate complex hyper-converged infrastructures. To this end, this Datacenter edition provides many exclusive features that can benefit organizations with many virtual systems and high demands in terms of IT alongside large workloads. These include Storage Spaces Direct (S2D) as well as Storage Replica, Shielded Virtual Machines (Shielded VM), Software Defined Networking (SDN) as well as the new network stack (Protocol Stack), which are described in more detail below.

In Windows Server 2016 Datacenter the Microsoft Azure Services are also available for this purpose, with further practical functions enabling an even closer connection of local environments to the Cloud.

Licensing of the Windows Server 2016 Datacenter-edition with used software

With the release of the Windows Server 2016 version, licensing of the Datacenter edition is now only Core-based: Thereby a minimum number of 16 cores is assumed for each Server, more cores can also be licensed supplementary with the corresponding 2-Core packages - more details below.

Wiresoft offers this 16-Core package to Windows Server 2016 Datacenter as used software. Compared to new software, buyers benefit above all from its lower price - without restrictions in the range of functions, e.g. in the use from VMs or the performance - also this older Server version is usually no longer offered new. Detailed information about the functionality of Microsoft Windows Server 2016 Datacenter Edition as well as the exact licensing terms can be found in the following overview.

Windows Server 2016 Datacenter Edition - all the benefits and exclusive features

With the Windows Server 2016 Datacenter Edition, large enterprises that develop and deploy highly virtualized environments or hyperconverged infrastructures receive a powerful Server software that meets all requirements. The integrated features and functions use innovative Microsoft technologies to provide stable and reliable applications.

The Datacenter edition is not only convincing in the network area, but also offers many advantages in the security and storage of data. This gives it the necessary flexibility to adapt the more complex IT infrastructures in companies to the current and future Business requirements of the digital age. As part of this, it enables the deployment of more cost-effective virtual storage, web and application platforms, and software-defined networking (SDN), complemented by improvements in Server management and automation, and data security and access.

Shielded Virtual Machines offer a high level of protection in networks against the theft or misuse of critical data used in mission-critical applications, for example, when they are outsourced to a public Cloud. The Shielded VMs use a Guarded Fabric for this purpose, which is composed of Host Guardian Service (HGS) and Guarded Hosts.

Software Defined Networking allows both physical (e.g. routers, switches) and virtual network devices (e.g. gateways) to be centrally configured and dynamically managed. SDN can also be used to secure networks and accelerate workload delivery, and Software Defined Networking can be used to define and scale policies to control both physical and virtual networks.

In addition to S2D, Storage Replica in Windows Server 2016 Datacenter is used to minimize downtimes with disaster preparedness while virtually eliminating data loss at the file system level. Storage Replica supports both synchronous replication, where data is mirrored at physical sites with fail-safe volumes, and asynchronous replication, where data is mirrored between sites across regional areas using higher-latency network links.

With the new security layers available in Windows Server 2016, threats to IT structures in a company are identified even better and appropriate countermeasures are initiated promptly. The protection of virtual machines has also been increased, including optimized access control and the integration of multiple layers of protection, which has reduced the security risk.

Enhanced security in the Datacenter Server-Edition is also provided by the Microsoft Zero Trust approach through a separation of host and virtual machine, with resources used in shared environments protected by shielded virtual machines. The Microsoft Host Guardian Service identifies trusted hosts and via Just in Time and Just Enough management, rules can also be defined to limit administrator access.

For application virtualization, Windows Server 2016 Datacenter offers even more options for deploying containers compared to the previous version, thanks to better integration of containers. These are complemented by other features such as Nano Server and the Azure Services, which are also briefly described.

In addition, the use of Windows Server 2016 Datacenter as a data center for the management of IT infrastructures is optimized by, among other things, new available Server roles as well as supplementary options for the assignment of user rights. Windows Server 2016 Datacenter can also be launched in the reduced Core application to improve performance on older hardware by not displaying the graphical Desktop interface.

The Datacenter-edition of Windows Server 2016 includes virtualization rights for unlimited virtual machines and Hyper-V containers. Storage features available with Hyper-V include iSCSI initiator to use the SCSI protocol over an IP network, the aforementioned Storage Spaces Direct, multipath I/O (MPIO) for increased resiliency through better load balancing, and VM Storage Resiliency to improve the availability of Hyper-V clusters by increasing the failure tolerance of storage systems.

Nano Server is a Remote managed server operating system that enables the creation of much leaner servers, as the use of a virtual engine can save up to 90% storage space in an enterprise server structure. Nano-Server is optimized for Windows Server containers or Docker and can therefore be configured to host Docker containers - in addition to being used for traditional server services such as file servers.

In Windows Server 2016 version provides an even closer connection between operating system and the Microsoft Azure Cloud-Services, to link distributed data centers even more efficiently and reliably into high-performance, high-availability servers and clusters. The major advantage of Azure is the provision of a homogeneous hybrid infrastructure - including security features and management.

The following overview provides a selection of server applications and components available with Windows Server 2016 Datacenter edition; these can be installed using the Server-Manager or PowerShell.

To ensure the smooth operation of Windows Server 2016 Datacenter Edition, the hardware used must meet the minimum requirements listed below. Additional requirements depend on the system configuration or other installed applications.

When licensing a server with used software from Windows Server 2016 Datacenter Edition, the usual prescribed Microsoft licensing requirements must be followed. At least one 16-Core Package is required for each basic server licensing, and the guidelines listed below must be followed.

With the release of the Windows Server 2016 version, Microsoft has also updated its licensing model from the ground up. Now the licensing of a server with the Datacenter edition is based on the number of cores of the physical hardware used. The following rules apply:

Provided that all physical cores of a Server have been licensed, the Datacenter edition of Windows Server 2016 includes unlimited virtualization rights: consequently, any number of operating system environments and any number of Hyper-V containers may be run on the licensed Server.

Generally, unlike hardware, software does not wear out, and with Used Software from Wiresoft you can be sure that it offers the same functionalities and also rights as a new server license. Therefore, Server cores can be licensed with a used 16-Core package from Windows Server 2016 Datacenter in the same way as with a new one. Answers to all other common questions regarding the features and usage rights of used Windows server licenses can be found here:

Are there any legal issues with selling or buying as well as using a Microsoft used software such as the Windows Server 2016 16-Core Package?

With used software Wiresoft you as a customer can be sure that neither the purchase of a Windows Server 2016 Datacenter 16-Core Package nor its official use does not violate any valid laws. Current case law permits both the trade in Microsoft Used Software and its use if it originates from a company's license inventory, as is the case with Wiresoft Used Software. Various court rulings have also clearly confirmed this fact time and again.

Where does the used software at Wiresoft come from in the Windows Server 2016 Datacenter 16-Core Package?

The 16-Core Packages offered at Wiresoft for Windows Server 2016 Datacenter originate, as already explained above, from various companies that have usually purchased the software new themselves and have usually actually used it, and later sold it to Wiresoft. Common reasons for selling are switching to a newer software version or using Server hardware with fewer cores, resulting in excess Server licenses. 16-Core packages are always offered as used software in the Wiresoft store, even if they are unused and can be used like a new license.

Is there buyer security with used software from Windows Server 2016 Datacenter?

The Windows Server 2016 Datacenter 16-Core package or any other Wiresoft used software offers you as a customer the usual buyer security - on the one hand by immediate download of the software package after the completed payment process and on the other hand by immediate license activation with the valid license Key - just as with new software.

Does Used Software from Wiresoft have another advantage?

Yes, and there are several: First of all, Wiresoft customers benefit from the lower price when purchasing used software; this allows companies or organizations to either supplement or update their software inventory more economically than with new software. Secondly, older Microsoft Server programs are rarely or never offered new, which becomes a problem when supplementary licensing is required to avoid upgrades. Used software from Wiresoft can thereby also contribute to lowering operating costs, because with the complete proof of all buyers it also offers audit security!