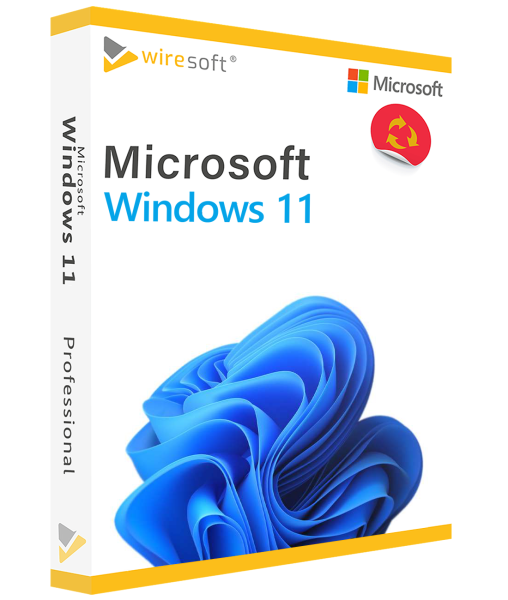 With the new Windows 11 Pro above all users, who place particularly high requirements to an operating system, receive a multiplicity of functions and possibilities, connected with a higher performance, in order to settle also in Business of enterprises all tasks efficiently. Windows 11 Pro presents itself in a modernized, even more user-friendly interface, which makes working on the PC even more intuitive and thus also more efficient, among other things in the new attractive "Float Design" as well as with the "Dark Mode" option.

With the new Windows 11 Pro, users who place particularly high demands on an operating system are provided with a wide range of functions and options, combined with higher performance, in order to efficiently complete all tasks in the business of companies. Windows 11 Pro presents itself in a modernized, even more user-friendly interface, which makes working on the PC even more intuitive and thus also more efficient, among other things in the new attractive "Float Design" and with the "Dark Mode" option.

Windows 11 Pro also offers many improvements and simplifications in usability, for example with the revised Start menu with central control, the integration of teams in the task bar, an improved search function and optimized operation via touch, digital pen and voice recognition. In addition, the widgets return with Windows 11 Pro and especially gaming fans can look forward to a graphically even more fascinating gaming experience.

At Wiresoft you can already find the new Windows 11 Pro at a reasonable price as used software - with a plus in performance and many business functions that will surely satisfy the demands of professional users. You can find out more about the new features and functions of Windows 11 Pro in the following overview - as well as directly from a Wiresoft employee in a live chat.

The new Windows 11 Pro offers a whole host of other features and tools in this edition that are especially important for businesses with many employees to manage: These include enhanced security features - both for endpoints and data. Here, Windows 11 Pro supports important device management functions such as group policies, as well as Windows Update for Business, which can be used to precisely control the deployment of updates in order to avoid potential hardware problems on individual end devices.

In terms of security, the following features are available specifically in Windows Pro, for example:

Especially in companies with many employees, the administration of individual users as well as groups poses greater challenges for admins. In Windows Pro, for example, the following features are available to them:

What else is new in Windows 11 Pro?

Windows 11 contains - not only in the Pro Edition - numerous new features and functions, which also offer a new user experience visually. Among the most important innovations are, for example, in the appearance:

The desktop has also been redesigned and now offers a new, more user-friendly design for intuitive work compared to the previous version:

In order for Windows 11 Pro to run on a local PC or laptop without restrictions, the hardware must meet certain requirements. In addition, up to 2 TB of RAM can be installed in the Windows 11 Pro edition instead of 128 GB, and a maximum of 2 full processors or 128 CPU cores are also supported. For more details, please contact a Wiresoft representative. The following minimum requirements apply:

The new Windows 11 Pro operating system is now also available as used software in the Wiresoft Software Shop - this means that it is available to you at a significantly lower price than comparable new software. When buying used software with Wiresoft, you also benefit from the following advantages: