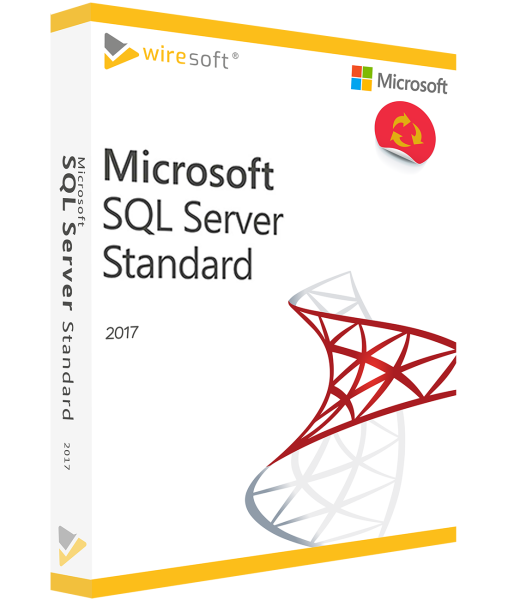 The SQL Server 2017 Standard edition from Microsoft provides all the powerful database, reporting and analysis features that small and medium-sized businesses expect from a relational database management system.

The SQL Server 2017 Standard edition from Microsoft provides all the powerful database, reporting and analysis functions that small and medium-sized companies expect from a relational database management system.

In addition to many enhancements and improvements to existing functions - for example, in Master Data Services and Reporting Services - this version also offers many new features. These include Business Intelligence and Always Encrypted technology - combined with high scalability to run typical mission-critical workloads securely and reliably.

With SQL Server 2017 Standard, you get new insights for your data: with In-Database Advanced Analytics for R and - new: also Python, complemented by meaningful interactive visualizations. The extended choice between different development languages and operating systems allows SQL Server applications to be deployed not only for Windows, but also for Linux, including Linux-based Docker containers - in addition to their local execution, those in the cloud are also available.

The SQL Server Standard edition thus meets all the requirements of a modern, powerful relational database management system, such as those typically found in ERP software, CRM and enterprise resource planning systems - Microsoft SQL Server 2017 Standard offers all the necessary prerequisites for a reliable and secure data warehousing platform.

The SQL Server 2017 Standard edition is offered by Wiresoft as used software at a significantly lower price than comparable new software - as far as it is still regularly available. This used server license can be used to its full extent and offers the maximum performance and security typical of the edition, which makes it particularly attractive for companies or organizations that use such servers, for which the combination of server license and CALs is ideal. The licensing of the used Microsoft SQL Server 2017 Standard Edition is also carried out according to the Microsoft license management conditions. Detailed information on this, as well as all the new features and important optimizations included in SQL Server 2017 Standard, can be found in the following sections.

In particular, smaller or medium-sized companies will benefit from the features of the Standard Edition of SQL Server 2017, which are required for the development and use of applications at data marts of appropriate size, and which, in addition to high scalability, also expect reliable disruption-free performance. Here, the Standard Edition already offers high virtualization as well as high availability for failover, advanced OLTP and in-memory columnstore - including real-time operational analytics and PolyBase technology, which can combine relational data and Big Data for their diverse use.

The updated Business Intelligence features provide multi-dimensional as well as basic tabular models for analyzing large data sets, including with in-memory storage mode and Basic Reporting and Analytics features. Advanced Analytics supports machine learning integration with SQL Server Machine Learning Services, as well as connectivity with - new: open source Python - and R; these also provide a consistent environment not only on Windows, but also for Linux and Docker, as well as real-time hybrid transaction and analytics processing.

SQL Server 2017 Standard also supports many development tools both on-premises and in the cloud, including T-SQL and SQL CLR. And in terms of security, Always Encrypted offers advanced protection, including Always On high availability and disaster recovery for Windows as well as now Linux.

Below is some more info from what's new for SQL Server 2017 Standard in key functional areas:

For SQL Server Analysis Services (SSAS), SQL Server 2017 includes some updates to existing key features as well as improvements to tabular models: For example, tabular mode is now available as a default installation option. The modern Get Data user interface (Function: Get Data) supports a wide range of data sources and offers a variety of data transformation features in the query builder for retrieving data and M-expressions - among other things, Get Data in Power BI uses existing data sources in queries in the Power Query M formula language.

The Scale Out feature simplifies the execution of SSIS packages across multiple computers, executions as well as workers can be managed from a single master computer. The Scale Out master supports high availability and optimized failover handling of execution logs.

Users can now use  the Linux operating system in SQL Server 2017 Standard Edition to access SQL Server through it. The connection is made via the Open Database Connectivity interface - for Linux as well as C++ applications. Integration Services is also available on Linux, so SSIS packages can run on Linux computers. In addition, the Java Database Connectivity driver has been optimized for corresponding Java applications.

Referred to as SQL Server R Services in previous versions of SQL Server 2017, this area has now been renamed SQL Server Machine Learning Services - the main reason for this is the addition of Python support alongside the previous R programming language, so either R or Python scripts can be used for execution. The prerequisite for the deployment of R and Python models is the installation of Microsoft Machine Learning servers. Developers can further access ML and AI libraries for Python, these are available via open source environment.

The following overview contains information on performance and the respective included features.

Other specifications and notes

Further applies to SQL Server 2017 Standard Edition or is available:

The following specifications apply when installing the Standard edition of MS SQL Server 2017, these are required as a minimum to ensure optimal operation. Basically:

This SQL Server 2019 Standard edition offers licensing of the server in a combination of the server license described here and additional client access licenses (CALs) - the latter are not included here and must therefore be purchased separately for each user or end device. Here is an overview of the Microsoft licensing terms:

This licensing model is therefore suitable for companies that license a manageable number of users or end devices, and where the overall licensing costs are lower than for core-based licensing.

If you have any questions about your individual SQL Server 2017 Standard licensing with CALs, please feel free to contact us.

A license to SQL Server 2017 Standard offered by Wiresoft as used software does not differ from a corresponding new server license - apart from the fact that a software generally does not wear out, but especially not in terms of its usability and functionality. Below you will find all the answers to typical questions about used SQL Server licenses:

Where does the software offered by Wiresoft as used SQL Server 2017 Standard come from?

Used SQL Server 2017 Standard software offered by Wiresoft or from another version or edition comes from companies that previously purchased it themselves as new and later resold it to Wiresoft - for various reasons, for example, because it is surplus or has been replaced by another software. Such licenses are marked as used software in the Wiresoft Shop, but in principle they can be used like a new license.

Yes: With Wiresoft used software such as the SQL Server 2017 Standard license, you as a customer have the same advantages when purchasing as with a corresponding new server software: with buyer security through immediate download after successfully completed purchase and immediate license activation with the supplied valid license key.

Are the purchase and also the use of SQL Server 2017 Standard as used software legal?

Yes: With used software from Wiresoft, you can be confident that you as a customer will not violate any laws either by purchasing such SQL Server 2017 Standard license or by actually using it - and this also applies to Wiresoft - because this used software comes from a company's license inventory. This is important, because the valid jurisdiction does not only allow trading with Microsoft Used Software, but also its actual use; these facts have already been confirmed several times by various court rulings.

Does used software from Wiresoft, such as the SQL Server 2017 Standard license, have any other advantages?

Wiresoft used software from offers our customers in particular an economical solution if they want to supplement or update their software inventories as cheaply as possible, because the price is lower than that of comparable new software. This is especially true for older versions of server licenses, which are no longer regularly offered. Used software from Wiresoft is also characterized by the complete proof of all buyers through audit security!

In the Wiresoft store for used software, you will not only find the SQL Server 2017 Standard Edition at an advantageous price, but also the Standard Edition with core licensing as well as other editions of SQL Server 2017; in addition, newer versions of Microsoft SQL Server. Wiresoft's used software portfolio also includes many offers from other Microsoft programs - with all the benefits mentioned above. If you have any questions regarding your licensing of SQL Server 2017 Standard incl. CALs or any other edition, please feel free to use our expert advice via chat or by e-mail or phone.