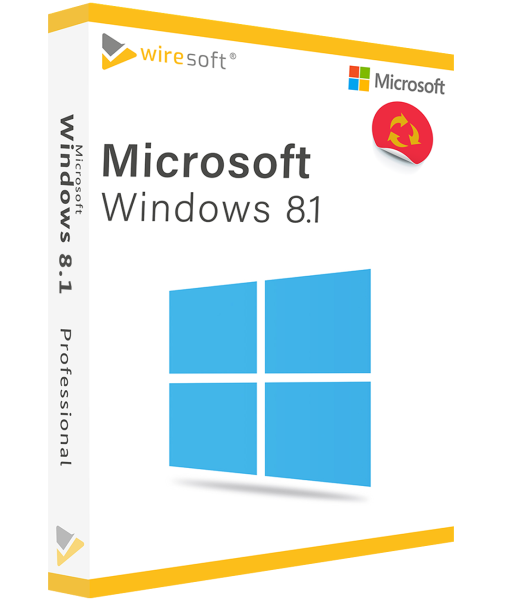 Windows 8.1 Professional is the convincing answer from Microsoft for all users who were not satisfied with the previous version. The main reason for this was the completely revised so-called metro design, which, in the style of tablet and smartphone interfaces, displayed the programs and other features in visually reduced, monochrome icons, also known as tiles because of their square basic shape.

In addition to the return of the familiar home screen  , Windows 8.1 offers a host of other improvements and, especially in the Pro Edition for businesses, a whole range of indispensable business functions that are essential for managing networks and the security rules associated with them, as well as for protecting data. Windows 8.1 Pro - designed for use in SMEs - offers features such as Domain Join, to allow end devices to access a network offline, BitLocker for data protection, especially on mobile devices, and the powerful virtualization technology Hyper-V.

The purchase of the 8.1 Pro Edition offers the great advantage that this Windows operating system can also be used on older hardware systems. In the Wiresoft Onlineshop you will find Windows 8.1 Pro as single user purchase version, other editions as well as older or newer operating systems and many other Microsoft programs. The following overview presents first the most important new features of Windows 8.1 Pro before, followed by important features of the entire version Windows 8.1.

Features of the Windows 8.1 Pro Edition

Windows 8.1 Pro with its additional features and characteristics is aimed primarily at those companies and power users for whom network security and virtualization play an important role. The following features offer comprehensive possibilities here:

One of the key features of the Windows 8.1 Pro edition is the Domain Join feature - essential for organizations to manage endpoints on a network.

With domain joining, computers can be connected offline to a corporate network via the Access Directory without the need for a physical or VPN connection. Offline domain join is governed by DirectAccess policies, which also define the rules for remote provisioning.

All network computers united under a domain are managed by an IT administrator through a domain controller - a server that centrally authenticates computers and users on a network of computers, giving them a common database and security policy and a unique name.

Using the integrated Group Policy Management Console (GPMC), they can change the domain policy or create new ones. With Windows 8.1 Pro, this process is also easier than with older versions. It also makes it easier for administrators to manage BYOD (Bring your own Device) scenarios with devices that do not belong to a specific domain, typically private mobile devices such as laptops, tablets or smartphones.

Also integrated in Windows 8.1 Pro is the new version of the virtualization technology Hyper-V. In addition to the possibility of completely isolating individual systems, this offers the use of various security functions such as Data Execution Prevention (DEP) at hardware level and Network Address Translation (NAT) for the management of IPv4 addresses.

Hyper-V is used for virtualization of data centers as well as smaller environments. With the version available in Windows 8.1 Pro, Hyper-V can also be used for client virtualization. Virtual servers can be moved or copied between Hyper-V hosts while the system is running. In addition, Hyper-V also handles images of hard disks in Virtual Hard Disk (or VDHX) format.

How quickly it happens that a tablet and laptop is lost or even stolen. Far more critical than the loss of the mobile device is the fact that sensitive or even personal data stored on it can no longer be used or misused. The BitLocker integrated in Windows 8.1 Pro at least prevents these data from being viewed by unauthorized persons or used for criminal purposes by securely encrypting them.

For this purpose, the practical "BitLocker To Go" tool also offers the possibility to encrypt USB sticks and external hard drives.

Furthermore, the Pro-Edition of Windows 81. Enhanced end-to-end security with Trusted Boot and Secure Boot, the Windows Firewall as well as Windows Defender and Microsoft SmartScreen, a filter to detect malicious software that could be loaded via a URL

And with the Encrypting File System (EFS), files on NTFS storage media can be securely encrypted under Windows operating systems, so that they remain confidential and protected even if unauthorized persons gain access to them through poorly protected access rights or the theft of storage media.

The most important general innovations and features of the Windows 8.1 version

Version 8.1. retains many of the fundamental innovations of the previous version of Windows 8, but improves on many details that users did not get along with or were not satisfied with. Basically, the idea of offering a uniform user interface across all devices running Windows 8.1. has been retained.

The typical tile look of the new operating system is the most striking feature for users: Instead of the previous list of all frequently used programs etc., all used and Standard now show up in a so-called "Modern UI" design - where UI stands for "User Interface" - which Microsoft also calls the Metro design.

In version 8.1 Pro, but also in the other editions, users can switch to the start menu view familiar from older versions of the operating system by clicking on the conspicuous button with the flag. Right-clicking gives them direct access to important Windows settings and the ability to restart or shut down the system. Users with Windows 8.1 also have the choice of starting the operating system with the tile interface or loading the desktop immediately.

For the selection of the background, instead of the integrated pre-selection of images etc., users can now also display their own photos etc. There is also the option to display several photos in turn.

New: The size and shape of the tiles can now be adjusted according to your own ideas. The goal of the completely new Modern UI design was originally to create a uniform appearance across all devices - from PCs and laptops to tablets and smartphones - whereby the tile design is more apparent on a smaller mobile phone than on a desktop screen. Version 8.1 Pro etc. now offers four tile sizes: Large, Wide, Medium and Small. This makes it easier to display unimportant or rarely used apps in a less conspicuous way, while popular apps, such as the new weather app, have a preview function that is easier to use due to the larger display, as it also shows a lot of live information. The larger displays also contain a short text info about which program it is, which is helpful for orientation with more technical apps.

Helpful: For users who are not (yet) familiar with the Windows 8.1 tile concept, Microsoft has integrated its own app "Help and Tips", with hints on operation, as well as explanatory texts and videos.

When apps are open Windows 8.1 displays the active tile programs side by side in freely selectable sizes - compared to the 8.1 version, which displayed the first app on one third of the screen width and the second app on two thirds of the width fixed. The display is particularly useful on end devices with a high-resolution screen. On desktop screens with a resolution of 1,920 x 1,200 pixels, even four open apps can be displayed. By moving the dividing line, the size of the apps can be varied even after opening. Three dots on the dividing line indicate which app is currently active.

Windows 8.1. offers - of course also in the Professional Edition - a number of new apps, which some users probably missed from their Smartphone, among others:

To keep track of the flood of old and new apps, they can be grouped together in Windows 8.1, which makes clicking through long lists unnecessary.

In addition, setting options are available to turn off typical new Windows 8 controls such as the Charms Bar. The idea behind the Charms Bar, introduced with Windows 8, is to give users direct access to the five important functions "Search, Share, Start, Devices and Settings". It becomes active as soon as a user moves the mouse pointer to the upper right corner of the screen and is displayed. At Windows 8.1 Pro, etc. the Charms Bar is easier to deactivate when not in use. You can also disable the function to switch between apps by clicking on the upper left corner of the monitor.

The online storage from Microsoft, SkyDrive, has been reworked once again for release 8.1. This is particularly apparent in the synchronization: Whereas previously, when copying files in SkyDrive via Windows Explorer, the automatic data synchronization of all files stored there with all end devices was performed, SkyDrive in Windows 8.1 now only synchronizes the folders and thumbnails. Only by double-clicking a file the storage service downloads it. This new setting is particularly useful if some of the end devices used have less hard disk space and the Internet connection is weaker. All data, both locally and in SkyDrive, is managed by the new SkyDrive app. Windows 8.1 also stores important PC settings and certain backup files in SkyDrive.

Hardware requirements for the installation of Windows 8.1 Pro etc.

BuyWindows 8.1 Pro from Wiresoft at a good price in our online shop

Windows 8.1 Pro is - if at all - still being offered in conventional stores as a new single license at a not inconsiderable price. In the Wiresoft online shop you can buy Windows 8.1 Professional as a single user license, however, at a considerably lower price than so-called used software - you will receive the identical software product.

This works as follows: The offered single license of the Windows 8.1 Pro Edition was formerly part of a volume license purchased by a company. Through its resale - an absolutely legal process in the EU - this was dissolved and converted into individual licenses, which are then called and offered as used software. However, this splitting of the volume license or the labeling as used software does not have any negative effects on the functionality of this Windows 8.1 Pro Desktop operating system, among other things because software is not subject to wear and tear.

Buying software with Wiresoft is always cheap and safe! You can buy this Windows 8.1 Pro operating system in the Wiresoft shop not only at a particularly favourable price - your purchase is also safe: Wiresoft sells only original Windows 8.1 Professional software, which is identical to the Microsoft product. Therefore your Windows 8.1 Pro license can be downloaded and installed on your device immediately after the successful purchase process and activated with a supplied volume license key valid only for you - without any time limit. The purchase of used software such as Windows 8.1 Pro in the Wiresoft software shop does not represent any legal risk for you, because the trade with used software is clearly allowed by law, which has been confirmed by numerous legally binding judgements.

The purchase of used software from Wiresoft offers our customers a favourable alternative to other offers in order to use the Windows 8.1 Professional desktop operating system. Our customers include SMEs and organizations, self-employed persons as well as private individuals who are happy to benefit from our inexpensive software offer!

In the Wiresoft software shop you will find Windows 8.1 Pro, other versions of the Windows desktop operating system and other Microsoft programs as a low-cost purchase version for immediate download. If you have any questions about this or any other Microsoft software, simply use our competent advice in chat or by e-mail or telephone.