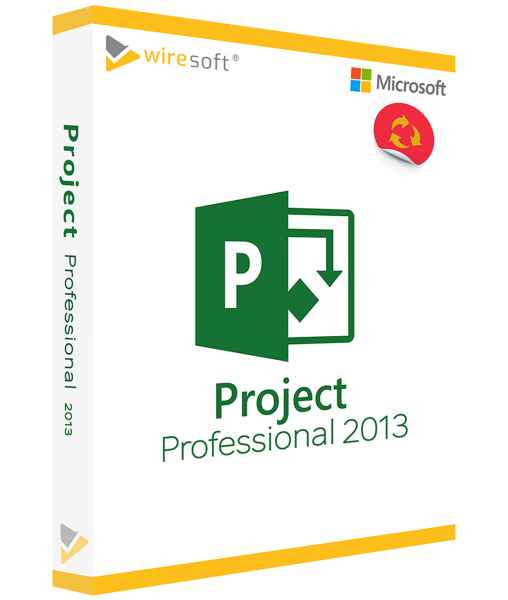 MS Project Professional 2013 is the most comprehensive edition of this Microsoft software solution to cover the most diverse types of projects with all relevant components, for their precise planning and administration as well as documentation - depending on the requirements under different aspects. Thus, Project Professional 2013 with its integrated functions and features meets all the project management requirements of even large companies and organizations that want to carry out complex tasks and manage all the resources involved, even in the long term.

A wide range of practical tools, which can be quickly accessed via the user-friendly desktop interface, makes it particularly easy to get started with the project management software, so that it can be used quickly even by inexperienced users; professionals will particularly appreciate the intuitive usability and the wide range of display options.

The tools integrated into MS Project Professional 2013 Edition enable the differentiated planning and control of resources, avoiding both duplicate allocations and the disregard of unused resources, so that the creation and adherence to deadlines and budgets is even better ensured - to ensure the successful implementation of the projects entered in Project. Especially for large projects, the numerous automations available in Project 2013 Professional are particularly helpful in order to immediately identify and avoid bottlenecks in resources and deadlines from the outset.

Especially in the Professional Edition, resources can be distributed by drag & drop, effects on the individual areas are immediately visible, so that far-reaching changes can be well planned. The choice between different representations of projects each focus on a single aspect: Timelines with highlighting of individual task paths allow a better overview down to individual details.

Also only included in the Project 2013 Professional Edition is the connection to Microsoft SharePoint, so that a project file stored there offers all team members quick insight into the current status - for effective communication with all participants.

For which users is the Project Professional 2013 Edition designed?

The Professional Edition of Project 2013 has been specially developed for the needs of project managers in companies of medium and just extensive size who also develop and supervise complex projects where a particularly differentiated presentation is necessary, e.g. because a large number of different resources of all kinds have to be managed. Here, the Team Planner function, which is also an exclusive feature of Project Professional 2013, offers a particularly large number of options - not only in the creation of a project schedule, but especially in the control of the current utilization of resources and budgets, so that all individual processes can be precisely displayed and documented in the form of reports.

A single license of Microsoft Project 2013 Professional edition is available from Wiresoft in the form of a purchase version as used software, which makes its price particularly affordable, so that many companies that do not provide a large budget for software can also benefit from its purchase. Another advantage of Project 2013 is that the software is supported by Windows 7, which makes it unnecessary to purchase a more recent operating system in order to use this project management software.

In addition to this edition of Project 2013 Professional, you can also find other editions as well as versions - and of course many other important Microsoft applications - in the Wiresoft online shop for used software, always at favorable conditions as used software. The following overview presents the most important features of MS Project 2013 and especially the Professional Edition.

Especially the Professional Edition of Project 2013 offers the following exclusive features or extensions of functions, which allow a much more differentiated presentation of projects including the more comprehensive communication in the team:

The "Team Planner" in Microsoft Project offers all users a comprehensive insight into the current status of a project; they can immediately see where a team is in the project schedule and where bottlenecks occur. Resource planning is much more accurate in the Professional Edition, allowing for even more efficient use in project management. All tasks can also be intuitively assigned to a resource via drag & drop, automatically creating corresponding restrictions or other effects in the schedule. In addition, resource overloads are clearly marked in color.

Each resource in the project is recorded in a separate line. All assigned tasks are displayed in the same row on the right. Resource tasks that do not have a defined start or end date are also displayed to the left of their name. Other details include tasks that have not yet been assigned to a person, two tasks assigned to the same people, unscheduled or unassigned tasks, and completed tasks. Tasks can also be deactivated and tasks reassigned in Project 2013.

By synchronizing with Microsoft SharePoint, project managers can share MPP project files with other SharePoint users. Members of a team can then instantly see which tasks are currently assigned to them and share their progress.

Overview of the general functions of Project 2013 Professional Edition

MS Project 2013 Professional Edition is designed to keep the planning and management of projects of any size as clear and simple as possible - right from the start: To this end, the Project Center integrated into Project 2013 makes creating a new project relatively easy for those project managers who are using the program for the first time or infrequently: first, they select the appropriate one from a comprehensive set of predefined templates and customize it according to further requirements. Similarly, it is possible to import data or information from Excel.

Alternatively, it is possible to create an unstructured project file in Project 2013 Professional with a Gantt chart that is still empty, or to open a suitable older project and reuse its structure.

For differentiated identification of the relevant resources or types thereof, many tools are now available, which are used intuitively to plan and control the course of the project, via the optimized desktop interface, the immediate capture of all essential information is possible at any time, so that project managers maintain an overview of important components in every phase.

Presentation according to timelines in Project 2013 Professional provides clarity

Fundamental components in MS Project 2013 Professional is the timeline view of the Gantt bar chart, which allows project managers to maintain an overview at every stage, even for more complex, long-term planning. This contains a snapshot of the current project status and also shows the milestones in addition to the most important tasks - the Professional Edition in particular offers even greater depth and detail here. Using the "Task Path" menu, individual task paths of a Gantt chart can be highlighted in addition to the task bars. By clicking on an individual task, the associated paths are displayed in a different color so that they stand out from the other tasks.

Comprehensive management of all resources in MS Project Professional 2013

The most important task in project management is the precise planning and use of all required resources, for which a clear display of the available resources is indispensable. MS Project Professional 2013 offers two different views for this purpose: "Resource Table" and "Resource Information". In addition, Project 2013 Professional distinguishes between three types of resources: labor, material and costs.

Furthermore, in Project Professional 2013, each resource type can be assigned an e-mail address for communication in addition to the exact specification of its designation - Lync can also be used optionally for this purpose - as well as its own login account with identification code. A free text field offers further space for the exact assignment of a resource, the field "Booking type" also differentiates between committed and scheduled resources. Additional options such as "Generic", "Active" or "Inactive" etc. are available for budget and material.

In addition to these options for precise identification of resources by type, Project 2013 Professional offers yet another differentiation option that goes beyond individual projects: namely, between those that are generally available throughout the entire company - these are called "enterprise resources" and are managed by an administrator - and so-called "local resources" - they are only available to individual project managers, and for a more precise definition of the respective skills there are the "generic resources".

The creation of informative reports for all crucial phases or under different aspects is also one of the typical tasks of project management. Here, Project 2013 Professional offers many options: Thus, for an ongoing project, the current status can be documented and important phases or elements can be described, but also, after its completion, a representation of the entire course of the project can be created, which is used as a template for future similar tasks. For this purpose, Microsoft Project 2013 contains appropriate report templates and table format templates for the different types of reports, including the respective drawing and charting tools, which can be used to document all important baseline plan values, such as how work, duration, dates and costs and - also, the Professional Edition allows greater depth and differentiation.

Reports created for a current project are automatically updated and adjusted, thus always providing up-to-date information. Project 2013 Professional offers a split view for this purpose, in which it is possible to observe exactly how the respective report changes in real time.

MS Project Professional 2013 also offers the option to create dynamic burndown reports that not only include the baseline schedule, but also show phases in progress, completed phases, and tasks, with an integrated line graph that shows at a glance whether the schedule is being met.

The Professional Edition of MS Project 2013 is available in the Wiresoft Online Shop as a single-user license - it is used software, which means that its price is significantly lower than comparable new software - however, this designation does not imply any restriction in the range of functions, not only because software is generally not subject to wear and tear.

The Single User License for the Professional Edition of Project 2013 offered at Wiresoft as Used Software is based on the dissolution of a volume license and its conversion into single licenses of this Microsoft program, which was previously purchased and possibly also used as such by a company. Neither does the splitting of the volume license have negative effects, such as a restriction of its usability, nor does this procedure represent a legally inadmissible process; moreover, all licenses for the Microsoft Project 2013 software offered at Wiresoft as used software, as well as for other Microsoft programs, originally come from a company. This means that, here also valid case law applies, which clearly clarifies that the purchase or sale of used software is a legal process. This fact has also been confirmed by various legally binding court rulings.

For you as a buyer this means that on the one hand a possible liability risk is reliably excluded, on the other hand Wiresoft used software is also audit-proof due to the complete documentation of the buyer and seller chain. The purchase version of MS Project 2013 Professional Edition offered by Wiresoft offers, in addition to its significantly lower sales price, the advantage of unlimited usability: it does not include a subscription, which may be associated with additional costs. Your software purchase from Wiresoft is therefore a safe deal that offers you only advantages! Moreover, this older version of Project Professional is hardly offered in regular trade.

In addition to the particularly favorable advantage price of a used license of Project 2013 Professional, you benefit from the secure instant download including the immediate activation of your license with the included valid volume license key.

With used software licenses from Wiresoft - not only for MS Project 2013 - you as a buyer can also continue to use older Microsoft program editions, in addition, you will also find other exclusive applications not available in conventional trade for individual users: these include many programs compatible with MS Project 2013 Professional as well as newer versions - including those of Windows operating systems. If you have any questions about MS Project 2013 Professional or any other Microsoft program offered, simply use our competent advice in the chat or by e-mail or telephone.