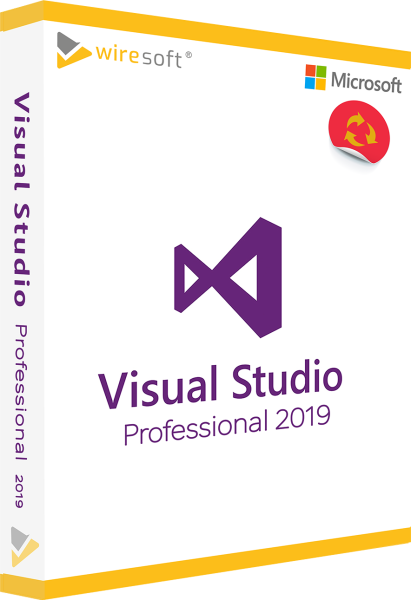 Visual Studio 2019 Professional from Microsoft is the latest version of the proven IDE (Integrated Development Environment), which was designed for demanding programmers and small or medium-sized developer teams. The comprehensive feature set offers all the tools to realize the next generation of apps and games - including Xamarin for Android, macOS, iOS, tvOS and watchOS based apps. Other features that make development even more efficient include Tool CodeLens to show how individual snippets of code are being used in the solution without interrupting work, IntelliCode to speed up work with AI-based solution suggestions, and Visual Studio Live Share, which supports teamwork through real-time collaboration. Also improved in Visual Studio 2019 Professional are navigation, refactorings, and the debugger. In addition, the Visual Studio 2019 Professional integrated development environment supports C# in addition to legacy languages such as C and C++.

The offer of Visual Studio 2019 Professional Edition as used software at Wiresoft offers developers all the advantages of this proven Microsoft software to use it themselves on their own PC through the low price as a single license.

In addition to significantly easier navigation, the latest 2019 version of Visual Studio is also more usable for developers with visual impairments. In addition, compared to the previous version, there is an optimized refactoring and a revision of the builds and solution loads. The debugger - among the most important programming tools  - also offers additional options.

Visual Studio 2019 's new launch window now offers several options: First, the option to clone or check out code from a repository is offered, alongside other options for opening or creating a project or solution. In addition, the modernized start window presents itself in a new blue design, which stands out from the previous version mainly due to the softer lines around icons, toolbars and tool windows. The menu has been moved to the top of the title bar to create more space for the code in the editor. This also optimized the memory space without changing the navigation in the IDE.

Similarly, the previous dialog has been overhauled, with the previous tree structure no longer existing and replaced by a search box with various powerful search and filter functions - e.g. by language, platform and project type - to find suitable templates. The search can be applied to commands, options as well as menus and also to installable components; in addition to the search results for commands, corresponding key combinations are also displayed. The results are displayed dynamically as you type. The newly integrated use of a fuzzy search algorithm also takes into account spelling errors or more natural language.

The new IntelliCode represents an evolution of the previous IntelliSense autocomplete in Visual Studio; it provides several AI-powered features, such as contextual IntelliSense, code formatting, and a format rule derivation, to further improve development productivity. Unlike IntelliSense, which displayed properties and methods as an alphabetical list, IntelliCode lists them according to the most likely candidate results, which are prefixed with an asterisk. Developers using C# can also apply IntelliCode to code they develop themselves and learn through it, while the other recommendations are based on the Microsoft open source domain. In Visual Studio 2019 Professional, AI-powered recommendations from IntelliSense can also be used for two other languages: C++ and XAML, and TypeScript/JavaScript and Java, respectively, which have been added to Visual Studio Code.

CodeLens significantly speeds up developer work with Visual Studio 2019 Professional, because the tool works independently in parallel, without the need to close the editor. CodeLens identifies all changes to a code as well as the code history, with

References to relevant code sections and changes, code reviews, linked errors, etc. Before changes are merged with the code, they can be reviewed to see how they would affect it. Code indicators for C# and Visual Basic code at the item level also show which team member made changes to the code. CodeLense is an exclusive feature of the

The Live Share feature built into Visual Studio 2019 Professional allows up to 30 developers to collaborate in real time on the same source code base, which is shared including context. This is possible because Visual Studio Live Share only transfers the file tree as well as context information. Each team member can thus work on the source code independently of the host in the familiar working environment. AI functions are also integrated here, among other things to improve code quality. Collaborative debugging is also possible with Visual Studio Live Share.

Other features of Visual Studio 2019 Professional

New refactorings are available for C# in Visual Studio 2019 Professional, making it even easier to organize code: For example, members can be moved to the interface or the base class and namespaces can be adjusted to correspond to a folder structure. Suitable suggestions are displayed in the so-called light bulb.

Code Cleanup is the feature to automatically reformat source code in Visual Studio 2019, it is displayed as a broom below the source code editor. Code format settings can be defined using an EditorConfig file, either on a project-by-project basis only, or for all code using the options in the Text Editor. For code cleanup of C# code files, Visual Studio 2019 Professional provides a dedicated Code Cleanup button in the editor. Users can also set the Preference and Severity values for each code format setting on a line-by-line basis, with Severity options of Refactoring Only, Suggestion, Warning, or Error. The hints or suggestions displayed in each case can not only be displayed with a single click, but also implemented immediately, while frequently occurring corrections can also be saved as a profile.

The debugger in Visual Studio 2019 Professional not only works at twice the speed of before; memory consumption when debugging out-of-process C++ applications has also been reduced. To identify objects by their properties, all you need to do in the debugger window is drag the cursor over a specific property and click the pin icon to see the corresponding information. Data Breakpoints are now available in Visual Studio 2019 for .NET Core applications, instead of just C++ as before. They break code execution whenever the value of a property for a given object changes, regardless of the position.

Apps built with Xamarin for Android, iOS, and Windows exhibit a native look and feel, which is why they are so popular. Xamarin in Visual Studio 2019 not only features faster compile and deployment times for Android, but now includes a property editor for Xamarin.Forms XAML and an optimized Xamarin.Forms Previewer.

Users who like to use multiple monitors or work remotely while developing should especially appreciate this feature: Until now, using monitors with different resolutions caused various problems when developing, for example, rendering was usually done at the wrong scale or Visual Studio itself was displayed blurry. Visual Studio 2019 Professional now offers PMA-enabled rendering, which means, among other things, that the software renders correctly regardless of the respective scaling factors. The minimum requirement for this is the Windows 10 Update (v1803, RS4) or .NET Framework 4.8 RTM.

When using Azure cloud services support, developers can also use the container development tools included in Visual Studio, among others, which greatly simplify building as well as debugging and deployment. Visual Studio 2019 Professional also offers Docker and Kubernetes support here, provided the endpoint has Docker Desktop as well as the necessary workloads for web development, Azure tools, and .NET Core development tools. The

Kubernetes support allows you to enable a connection between an on-premises project and a Kubernetes cluster under Azure Kubernetes Service (AKS).

In principle, the 64-bit version is recommended when installing Visual Studio 2019 Professional, and the following specifications apply as minimum requirements:

The Visual Studio 2019 Professional software is available in the Wiresoft online shop as a single license at a particularly favorable advantage price as so-called used software.

Buying software is always a safe purchase for you at Wiresoft! The Visual Studio 2019 Professional license available at Wiresoft Shop not only has an absolutely affordable price, but also offers security at the time of purchase through instant download and license activation with the included valid volume license key.

Every purchase of Visual Studio 2019 Professional or any other Microsoft program as used software in the Wiresoft Software Shop is no legal problem for our customers, because the trade with such used software is legally allowed, which has been clearly confirmed by numerous court decisions.

Single licenses of used software such as Visual Studio 2019 Professional Edition offer buyers a low-priced alternative to conventional offers to use exclusive program editions. You too can benefit from our great deals on Microsoft software products!