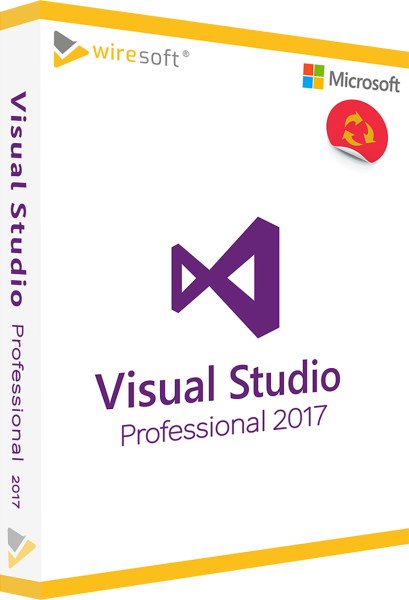 Visual Studio Professional 2017 - everything on board for professional program creation, in the purchase version

With Visual Studio 2017 in Professional Edition, users have everything they need to create apps and programs - from development, to code debugging and version control, to release.

Visual Studio Professional supports older languages such as C and C++ as well as current variants such as C# and the Apple Metal programming language, iOS, JavaScript and Python, and other Web languages. In addition, the software accompanies users with live support when writing code, regardless of the language used.

The precise debugging functions facilitate troubleshooting as well as the elimination of bugs and thus save valuable time during app development.

The quick view of the tree always shows where developers are in the structure of a piece of code, and the central error list displays all compilation, building and code analysis problems, including domain-specific problems for some languages, through live analysis as they are being written.

In particular,Visual Studio Professional 2017 provides many improvements to frequently used features such as IntelliSense and refactoring, but also to code navigation and code correction, as well as IntelliSense and CodeLens, which increases the focus on developer work by immediately highlighting references and changes to code, etc., directly in the editor.

Who is Visual Studio 2017 Professional for?

The offer of Visual Studio 2017 Professional as used software at Wiresoft offers developers all the advantages of the proven Microsoft software at a particularly favorable price as a single license for use on their own PC, without any subscription obligation.

Overview of the Key Features Included in Visual Studio 2017 Professional

The 2017 version of Visual Studio includes many improvements over the previous version, as well as a number of new features to make development work even faster and more efficient. When installing this Professional Edition, admins can choose to use only the Core Editor, or if a user also wants to write .NET desktop applications, Python code, or games with Unity.

And at program startup, the improvements are already noticeable by the reduction of boot times, as well as when starting a session and loading solutions.

Among the features that now also work faster is the recognition of templates for projects and elements.

In addition, Visual Studio 2017 provides several improvements in the respective editors for C++, C#, Visual Basic, F#, JavaScript and TypeScript, as well as in the code debugging and problem diagnosis systems and tools used for software development with .NET Core and ASP .NET Core, but also Xamarin, Apache Cordova and Unity, and MS SQL Server. In addition, the following features in Visual Studio 2017 Professional should be mentioned in particular:

Likewise, IntelliSense can be used to explore an API more quickly, since the set of values can be limited by a category. The tooltips also make it easier to explore API definitions, alerting you to problems as you type and marking critical locations with wavy lines.

With CodeLens, developers always keep the overview even while working - without having to leave the code and can easily navigate to individual functions. CodeLens marks all changes to the code in the editor and also shows the last developer who adapted a method; it also shows whether a test has been passed at the relevant place in the code where it is currently located.

By enabling Team Explorer, developers can coordinate a project with other team members, making it easier to manage the assigned tasks. Team Explorer connects Visual Studio to Git or GitHub repositories and Foundation Version Control (TFVC) repositories, among others, as well as projects hosted by Azure DevOps Services to manage builds, work items, and source code.

It is not uncommon for code to need to be improved during the course of a project. Refactoring updates the internal structure of the code without changing its behavior. Visual Studio 2017 Professional includes a number of new refactorings, such as generating overrides, adding parameters and named arguments, the ability to add separators to literals, change the base of numeric literals (including "hexadecimal" to "binary"), convert an If statement to a Switch statement, remove unused variables, and add NULL checks for parameters.

a separate remote repository with Git, the version control system, which is a widely used Standard for this purpose.

Since Visual Studio Team Foundation or its server typically requires a subscription or direct login to Visual Studio 2017, users can also use Git, the open source file versioning software. This allows the members of a team to work on the same projects simultaneously.

For this purpose, Visual Studio 2017 offers the option of managing repositories directly via buttons in the IDE. This allows code to be quickly set up, transferred, and published for a Git service. The edition also includes new features and enhancements, including push and commit, and SSH support, so Git can now be used to perform even more tasks in the IDE.

Visual Studio 2017 also has a strong focus on the development of Windows, iOS and Android mobile applications with support for Xamarin. Among the integrated Xamarin features is the Xamarin Forms Previewer, which allows developers to preview live XAML markup and immediately see the impact of a line of code on an application. Xamarin Forms also includes enhancements to IntelliSense for XAML to support bindings and converters, custom controls and properties, and more.

The Visual Studio 2017 Professional Software from Microsoft is available in the Wiresoft online shop as a single license as used software at a particularly favourable special price.

Software purchase with Wiresoft - always a safe purchase for you! The license of Visual Studio 2017 Professional offered in the Wiresoft Shop at an absolutely favourable price also offers security by the immediate download and the direct license activation with the included valid volume license key.

Every purchase of used software from Visual Studio 2017 Professional or any other Microsoft program in the Wiresoft Software Shop is legally secured for our customers, because trading with used software is expressly permitted by law, which has also been clearly confirmed by corresponding court decisions.

The single license of a used software such as Visual Studio 2017 Professional Edition is an inexpensive alternative to conventional software offers for buyers and therefore offers the chance to use exclusive program editions. You too can benefit from our low-priced used software offer for Microsoft software products!