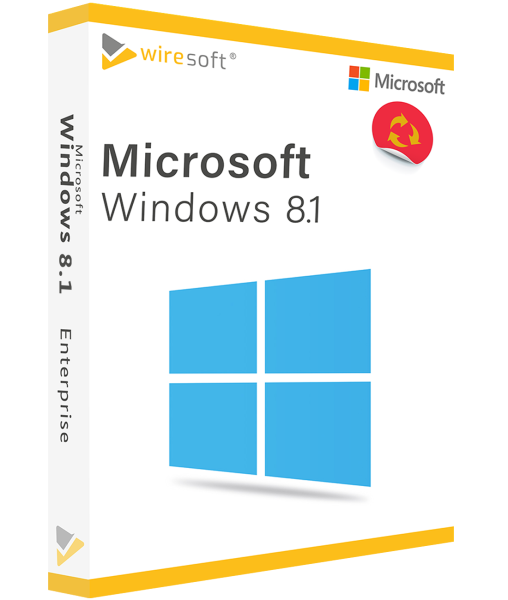 Windows 8.1 Enterprise - buy the maximum efficiency as a single license

Windows 8.1 Enterprise is the most comprehensive edition of the Microsoft operating system version 8.1 - it offers a fundamental revision of the previous version while retaining its essential innovations: in particular, the visually completely new Metro design, which for the first time offers a uniform user interface across all terminals. The so-called "Modern UI" design (UI = "User Interface") displays all frequently used apps and other tools in simple, minimalistically designed icons in a tiled form.

Under the innovative desktop interface, which now also includes the familiar startup view of the older versions, offers Windows 8.1 especially in the Enterprise Edition a whole range of important exclusive functions and possibilities, which are indispensable in companies especially for the creation and administration of networks - including comprehensive security and data protection: In addition to Windows To Go, which allows users to take the entire Windows 8.1 operating system with them virtually anywhere on a USB stick, these include DirectAccess, which allows a remote connection to be established between client computers and company networks even without a VPN, AppLocker, which allows programs and scripts to be restricted to end devices, and BranchCache for accelerated data access in company networks.

The purchase of the 8.1 Enterprise Edition as used software from Wiresoft offers users the advantage of being able to use this operating system, which was offered by Microsoft exclusively as a volume license, as a single license. In addition, Windows 8.1 Enterprise is compatible with many older hardware systems, which further extends the circle of users.

The Windows 8.1 Enterprise, with its exclusive plus of functions and features, is primarily designed for larger companies and organizations for which remote availability plays an important role in addition to network administration. The following features in particular make up the decisive added value of Windows 8.1 Enterprise:

With Windows To Go, Windows 8.1 Enterprise users have everything they need to start using Windows 8.1 Enterprise on any device in one hand: as a USB stick. This feature expands the possible uses of the Windows operating system to include non-company computers, for example by freelancers or temporary employees, who can also gain temporary access to the network. With features such as Start Screen Control, the start screen can be pre-defined by the admin in order to define uniform use across all users.

DirectAccess for Windows 8.1 Enterprise allows the creation of a proprietary, IPv6-based remote connection where users can access resources in a corporate network without the need to start a VPN. Administrators can also access the computers of remote users to change policies and update software.

In Windows 8.1 Enterprise, BranchCache is used to optimize the transmission of content over Wide Area Networks (WANs) - it can be used to cache content from file, remote and web servers on local clients and servers. As soon as files change at the source, Windows 8.1 Enterprise does not transfer the complete files, but only the blocks that have changed. This also applies when accessing via DirectAccess or other VPN scenarios. The advantage is therefore the reduction of network traffic and the increase of the access speed to all contents. BranchCache can be especially useful when connecting branch offices.

This exclusive feature in Windows 8.1 Enterprise restricts access rights to run certain programs and scripts to strengthen the security of endpoints and the data on them.

With Windows 8.1 Enterprise, SideLoading allows the installation of in-house apps on domain PCs and tablets without using the "official" method of deployment. In addition, SideLoading offers access to more applications on mobile devices than via commercial app stores such as Google Play.

Other features in Windows 8.1 Enterprise that are important for businesses

As the most Windows 8.1 Editions most comprehensive, Windows 8.1 Enterprise also offers additional functions that are particularly important for companies, especially those that play a role in the creation and administration of networks and security:

Typical additions and new features for the entire Windows 8.1 version

The Windows 8.1 operating system retains the typical, fundamentally revised design of the previous version of Windows 8, but Microsoft has responded to the wishes of many users and now offers an improved version with several changes that make it easier to use.

As before, the start screen of Windows 8.1 Enterprise and the other editions the new Metro design with the single-color tiles. However, users can now switch to the familiar older start menu view by clicking the Windows. Here they can change important settings directly with a right click or perform functions such as restarting or switching off immediately. Windows 8.1. also offers the following:

SkyDrive, Microsoft's online storage service, now has a more powerful synchronization, where only folders and thumbnails are updated, compared to the complete automatic data synchronization with end devices. Files are now actually updated and downloaded only after double-clicking, saving hard drive resources and being especially useful when the Internet connection is weak.

For the entire Windows 8.1 version, including the 8.1 Enterprise Edition, there are various new apps that can be used to do practical things. These include the calculator app for simple calculations, but also for converting units of measurement, the alarm clock app including countdown timer and stopwatch, the app for cooking and enjoyment, with many recipes and shopping lists, and the sound recorder app for your own sound recordings, which can be saved directly from the app to SkyDrive. The photo app contains basic image editing functions, for example to adjust the exposure and colour tone. All apps can now also be grouped according to your own wishes.

Hardware requirements for the installation of Windows 8.1 Enterprise

Your secure purchase - Windows 8.1 Enterprise at Wiresoft as single license

Microsoft used software purchase - safe and cheap at Wiresoft: The single license of the Windows 8.1 Enterprise Edition offered here for purchase was part of a more extensive volume license, as it is usually only purchased by larger companies. The latter has the right to resell - a legal procedure according to EU law - whereby the volume license is first broken down into individual licenses and then marketed as used software. This splitting up and the new designation as used software does not have any actual effect on the usability or functionality of this Windows 8.1 Enterprise or any other desktop operating system, because software is generally not subject to wear and tear.

Wiresoft sells original Enterprise editions of the Windows 8.1 software, which is identical with the product offered by Microsoft. The purchase of used software in Wiresoft's software shop does not represent any legal risk for you, because the trade with used Microsoft software is clearly permitted by law, which has also been confirmed by numerous legally binding judgements.

For this reason, you can download the Windows 8.1 Enterprise licence immediately after the purchase process completed by you on a terminal device and activate it with the volume licence key supplied with it, which is only valid for you, and use it without any restrictions.

Purchasing software from Wiresoft is therefore also inexpensive: Used software from Wiresoft offers customers a clearly favourable alternative to many other software offers, if they want to use the Windows 8.1 Enterprise desktop operating system as a single-user license. By the Used Software offer of single user licenses in the Wiresoft Shop you can also buy special editions like 8.1 Enterprise at a particularly favourable price - just like many of our previous customers, which include SMEs and organisations, but also self-employed persons and private individuals, who benefit from our reasonably priced software offer!

In the Wiresoft software shop you will find Windows 8.1 Enterprise as used software as well as other versions of Windows Desktop operating systems as well as programs from Microsoft as an inexpensive purchase version for immediate download. If you have any questions about this or any other Microsoft software, simply use our competent advice in chat or by e-mail or telephone.