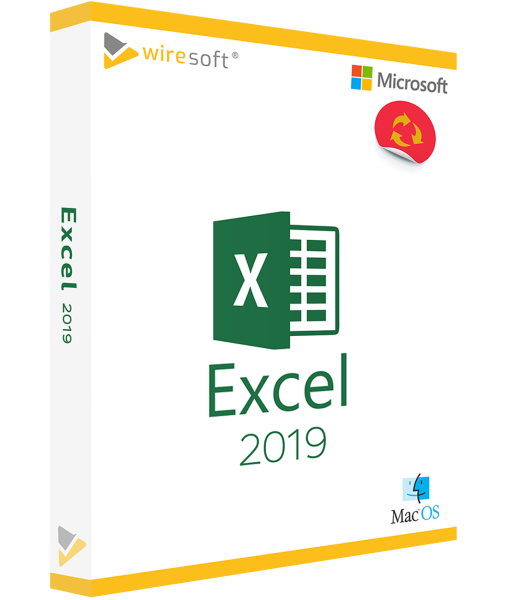 Microsoft Excel is the unsurpassed spreadsheet software to date, with which complex mathematical as well as commercial calculations can be performed. The current version 2019 for Mac also has a lot of new things in store for this: In addition to numerous improvements, the program has been supplemented with a variety of new functions to perform logical and business mathematical analyses in addition to statistical ones, also supported by the use of pivot tables. A wide selection of chart types, scalable graphs and models also allows for the meaningful and clear presentation of results for report creation. Excel 2019 is supported by PowerBI, the powerful business analysis service from Microsoft, which also allows direct export of data to other system environments.

Microsoft Excel 2019 for Mac as a convenient single user license

Microsoft Excel is the unsurpassed spreadsheet software for performing complex mathematical and commercial calculations. And the latest version 2019 for Mac has a lot more to offer: In addition to numerous improvements, the program has been enhanced with a number of new functions to perform logical and business mathematical analyses in addition to statistical ones, also supported by the use of pivot tables. A wide selection of diagram types, scalable graphics and models allows the results to be displayed clearly and concisely for report generation. Excel 2019 is supported by PowerBI, Microsoft's powerful business analysis service, which also allows data to be exported directly to other system environments.

Various new graphical tools allow you to highlight important data in color or to create your own formulas and charts ad hoc and use them immediately. Excel 2019 for Mac also offers improved touch support on tablets, making it easier to use, especially on tablets or smartphones. This makes using the new Freehand Drawing tool even more convenient and easy. It also offers improved ways to create accessible tables and workbooks.

In the Wiresoft Onlineshop you will find the current Excel version 2019 for Mac especially low-priced as single user version, i.e. without software subscription, as well as its predecessor and all other Office. Below is an overview of all important new features of Excel 2019 for Mac.

The new Excel 2019 for Mac includes many improvements of the previous version as well as many new tools and functions, some of which were previously only included in the Office subscription model. These are both typical Excel functions and general MS Office.

The linking of tables for advanced queries has been optimized in Excel 2019 for Mac with the following handy features:

Optimizations in Excel 2019 for Mac for PivotTable

PivotTable, the efficient Excel tool for analyzing and evaluating large volumes of data using measures and KPIs, among other things, and presenting the results in a clear and concise manner - has been enhanced in the 2019 version with a number of practical functions in addition to improvements in user-friendliness:

Extend the library of charts and 3D models

Other new features in Excel and other Office

A variety of practical features are also available in classic Office such as Excel 2019, which not only concern the design, but also the insertion or editing of graphics, as well as other practical tools.

New view options and desktop features in Excel for Mac

Excel also includes various background and program designs, whose goal is to make working on the Mac screen as pleasant and eye-friendly as possible.

Freehand tool in Excel for Mac for writing and sketching

Excel 2019 for Mac now also has new freehand functions, which are supplemented by a wide range of effects. The new Freehand Drawing tool allows users to mark selected areas, but most importantly to draw formulas, charts, etc. spontaneously and import them immediately into a workbook. Users have the following options:

Also available in Excel 2019 for Mac as a handy feature: new and optimized functions help to prepare the contents of Excel documents so that even users with limited understanding can read and edit them more easily. By activating the supporting error correction, improvements are directly displayed at the relevant places in the document; the following tools are included:

Other useful features of Excel 2019 for Mac

The new features listed below are available in Excel, in addition to other Office Suite 2019 programs, and make your work even more efficient:

System requirements for Excel 2019 for macOS

In order for users to install and run Excel 2019 for Mac on an Apple device, the device must meet the following specifications as minimum requirements:

Buy Excel 2019 for Mac as Office single program from Wiresoft

MS Excel 2019 for Mac is a standard part of the Microsoft Office 2019 for macOS, but unlike many other Microsoft software providers, you can buy Excel 2019 for Mac in the Wiresoft online shop as a single program without the other components of the Office 2019. This means for you that you do not have to subscribe to updates with costs. It also means that with this Mac version for Excel 2019, you do not have to observe any time restrictions with regard to the period of use. This single-user license is identical to the Excel program included in the Office Suite 2019 for Mac.

The purchase of Excel 2019 for Mac from Wiresoft saves money, which is not only an advantage for freelancers, but also for smaller companies with few employees, who only want to use this classic spreadsheet software at work or at home and do not need the entire Office.

Whether Excel, Word or other programs - all software licenses offered in the Wiresoft Software Shop are original Microsoft products. Usually these are single user licenses which come from a volume license, or they were purchased by a company and can be used freely again by selling them to Wiresoft. This means that their usability is not restricted in terms of functions or duration, nor do you as a buyer enter a legal grey area. As a serious software dealer, Wiresoft only offers full versions of Microsoft programs that are 100% usable for our customers.

If you have further questions about Excel for Mac or any other Office for Mac or would like to take advantage of our competent advice, simply contact us by e-mail, phone or immediately here in the chat.