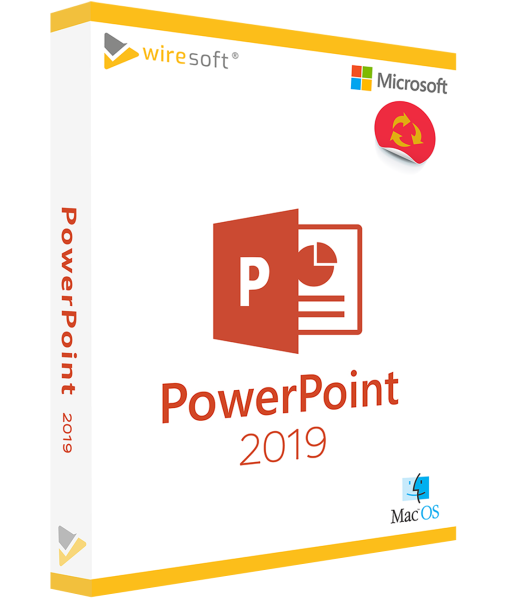 Microsoft PowerPoint for Mac 2019 as a single Office

When it comes to presenting content in the form of a presentation in a convincing and lively way, Microsoft PowerPoint is still the classic software program for this purpose. With its diverse design options and supporting functions, informative slides can be created that attract attention through dynamic transitions and animations.

With PowerPoint for Mac 2019, Wiresoft now offers the latest version of the proven Office for macOS operating systems. The integrated, intuitively usable tools support not only professionals and experienced users, but also beginners and Windows users at work, school and university in preparing topics and content on slides and in assembling them into a lively presentation that is both informative and impressive as a professional video presentation. The possibility of taking accessibility into account during creation also expands the circle of people who can be reached by using PowerPoint 2019 for Mac.

The user interface of Microsoft PowerPoint for Mac 2019 has been redesigned to make it even more user-friendly; it allows new users to get started quickly with the program. This is also supported by the large selection of templates and design options, which allow the creation of presentation slides with an individual look.

Furthermore, PowerPoint for Mac 2019 supports touch-optimized use - this applies to tablets as well as to the general use of digital pens - especially the new freehand drawing tool has a wide range of effects and shapes to spontaneously create professional sketches yourself.

PowerPoint for Mac 2019 is only available from conventional suppliers as a permanently integrated part of the corresponding Office, but you can also buy the software separately in Wiresoft's online shop - and at an unbeatable price! Please also note the system requirements listed below to be able to use all functions. At Wiresoft you can get not only PowerPoint for Mac 2019, but also the pre-versions as single user version, as well as other Office. All important new features in PowerPoint for Mac 2019 are presented in the following detailed overview.

Overview of the new PowerPoint features in the Mac 2019 version

PowerPoint for Mac 2019 includes many enhancements and improvements to the functionality of the existing tools, as well as many new features. Particularly noteworthy are the morph function, the addition of SVG and 3D graphics, and even better support for creating accessible presentations.

Microsoft has included several new features in PowerPoint for Mac 2019 that make the presentation experience more interesting and varied, including morphing and improved video recording:

PowerPoint for Mac 2019 also expands the portfolio of graphics and models for designing PowerPoint slides with a whole range of additional diagrams, including three-dimensional models that offer even more options for illustrating presentations:

General features in PowerPoint for Mac 2019

In addition to the new tools and features mentioned above, PowerPoint for Mac 2019 also has many other new features and optimizations. These include, in particular, support for freehand drawing as well as support for the creation of barrier-free presentation documents.

New options for desktop view in PowerPoint for Mac 2019

The Windows Office has been adapted in PowerPoint for Mac 2019. The new view options can be deactivated again if desired:

PowerPoint for Mac 2019 now has a handy freehand tool that allows you to immediately draw formulas or diagrams as well as graphics and insert them into a slide. The tool can be used not only with a pen or, in the case of touch operation, with a finger, but also with a computer mouse. For this purpose, a series of coloured pens is available to highlight text passages in colour, as has long been known from Word. The freehand drawing tool in PowerPoint for Mac 2019 offers the following features and effects in particular:

The ability to design slides in PowerPoint to make them easier to read and understand for visually impaired viewers has not only been improved in the 2019 Mac version, but new features have also been added:

If several people want to work on a PowerPoint presentation, this is also possible on a Mac. This requires the use of one of the two Microsoft cloud services OneDrive or SharePoint. First, a copy of the presentation is published there, which is then edited by the respective invited employees. After all involved persons have inserted their changes or comments, the original and copy(s) are merged again, whereby the differences are displayed and can be undone if necessary.

System requirements for using Microsoft PowerPoint 2019 on a Mac

The following information lists the minimum requirements for installing and running PowerPoint for Mac 2019 on an Apple device.

Please note that in order to use some of the software's features, at least macOS version 10.13.4 (High Sierra) must be installed.

MS PowerPoint 2019 for Mac is a typical component of the corresponding Microsoft Office for Mac and is usually not available alone in conventional software stores. At Wiresoft you can also buy the program PowerPoint for Mac 2019 separately!

Your advantages: The purchase version of PowerPoint offered by Wiresoft is a single user license, which neither obliges you to a long-term and expensive subscription including updates, nor does it mean any restrictions in the functions. Therefore it is doubly worthwhile for you to buy PowerPoint for Mac 2019 as a single program from Wiresoft, especially if you do not need the other Office.

Your software purchase with Wiresoft is always cheap and safe! The PowerPoint for Mac 2019 single user license you purchase here is either from a larger volume license for companies or is a used software license - hence its special price advantage! In terms of functionality, the software offered is identical to the corresponding PowerPoint program, which is also part of the Office Suite for Mac 2019. This way, especially smaller companies and individual users such as freelancers or private individuals can benefit from all advantages of the PowerPoint for Mac 2019 version and save money.

Every Microsoft program offered by Wiresoft has also been tested for its actual, flawless usability - thus it is available for download immediately after your purchase and can also be used for an unlimited period of time and without any limitations.

You can always be sure that neither you nor we are in a legally unclear situation when buying or selling used software! Because the trade with used software is explicitly allowed in the EU.

In the software shop of Wiresoft you can buy not only PowerPoint for Mac in the current and older versions, but also all other Office individually, and also many other Microsoft programs.

If you have any questions about PowerPoint for Mac 2019 or any other Office, simply use our expert advice via e-mail, telephone and chat.