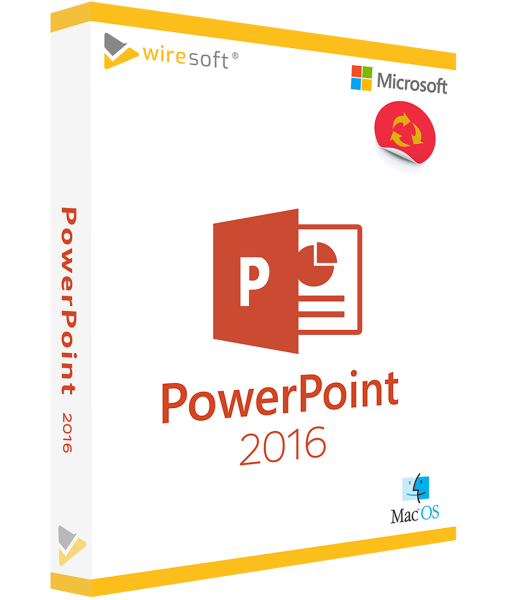 PowerPoint for Mac is the versatile software program from for Apple- , to be able to efficiently plan and design vivid presentations on a Mac computer as well and to present them comfortably to partners and colleagues. This 2016 version of for Mac thus provides another milestone of the widely used and appreciated software, which is used in many fields - not only in business, but also in school and university. In doing so, for Mac 2016 supports both beginners and professional users with many integrated, intuitively usable tools to create informative presentation slides and to clearly convey their contents in a lecture. MicrosoftUser Business PowerPoint Office PowerPoint

Microsoft PowerPoint for Mac 2016 as a Office

PowerPoint for Mac is Microsoft's versatile software program for Apple users to efficiently plan and design vivid presentations on a Mac computer and to conveniently present them to business partners and colleagues. This 2016 version of PowerPoint for Mac thus represents a further milestone in the widely used and valued Office that is used in many areas - not only in the company, but also at school and at university. PowerPoint for Mac 2016 supports both beginners and professional users with many integrated, intuitively usable tools to create informative presentation slides and to clearly convey their contents in a lecture.

In addition, the user-friendly interface of Microsoft PowerPoint for Mac 2016 provides a quick and easy introduction to the software. A large selection of templates and graphics can be used directly to design each presentation individually.

Basically, the Mac version of PowerPoint 2016 shows a striking revision of the previous design: despite the adaptation optimized for OS X, the typical Windows user interface with its familiar layout has been retained. The key combinations familiar from the Windows version have also been adopted, which can be an advantage for users who frequently switch between the two operating systems. However, these users do not have to do without the familiar features of the Mac system. PowerPoint for Mac 2016 also optimizes cross-platform compatibility between documents, so that presentations created in Windows and those created in OS X are more consistent.

Apple users who also use the Microsoft cloud service OneDrive can share documents created with PowerPoint for Mac 2016 online with colleagues for more efficient collaboration.

This PowerPoint for Mac 2016 version includes many optimizations and enhancements to existing features as well as new tools and customizations to give you even more freedom in creating presentations, but also to facilitate online collaboration with other users.

Use practical Office in PowerPoint for Mac 2016

As a classic MS Office program, PowerPoint for Mac 2016 also contains a whole range of general functions that make it easier to create presentations and also expand the possibilities for collaborative work. These include in particular the following features and tools:

System requirements for PowerPoint for Mac 2016:

PowerPoint for Mac 2016 is only available in 64-bit. In addition, the following minimum requirements apply to the installation or operation of the Office:

Buy PowerPoint for Mac 2016 as an Office at Wiresoft

Your clear advantage when buying software from Wiresoft: The single user license of PowerPoint for Mac 2016 offered in the shop is a purchase version, which therefore does not oblige you to a subscription, which usually binds you on a long-term basis - with obligatory updates or time restrictions on use - and is usually also expensive. That's why buying software from Wiresoft is worthwhile for several reasons, even if you don't want to buy additional Office for Mac.

And: Buying software with Wiresoft is safe: The available single user license of PowerPoint for Mac 2016, which you buy in our shop, was usually part of a larger volume license, as used by companies. Therefore it is a so-called used software - hence our really low price! Nevertheless, you can be sure that the purchase of the used software offered by us does not take place in a legally unclarified situation, neither for you nor for us, because the trade with used software is clearly allowed by law in Europe and therefore absolutely legal!

The scope of functions of this PowerPoint for Mac 2016 software license is completely identical to that of the PowerPoint program, which is also included in the corresponding Office Suite for Mac 2016. In principle, Wiresoft only offers full versions of Microsoft programs that are identical to the editions available from Microsoft itself.

Each such offered single Microsoft program license, which comes from a larger volume license, has been tested by Wiresoft for proper, unlimited usability; therefore this PowerPoint for Mac 2016 software is also registered only to you after purchase and download and is also 100% usable by you.

Used software is not only beneficial for private users, but also for self-employed persons and smaller companies, if the purchase of a conventional single user license or a volume license is not worthwhile, because it allows them to benefit from all the advantages of PowerPoint for Mac 2016 and save money at the same time.

In addition to the PowerPoint program for Mac 2016, you will find in the Wiresoft software shop not only newer and older purchased versions of this software, but also other MS Office for Mac as single user license, as well as other Microsoft programs.

If you have any questions about PowerPoint for Mac 2016 or any other MS Office for Mac, simply use our competent advice via e-mail, telephone and chat.