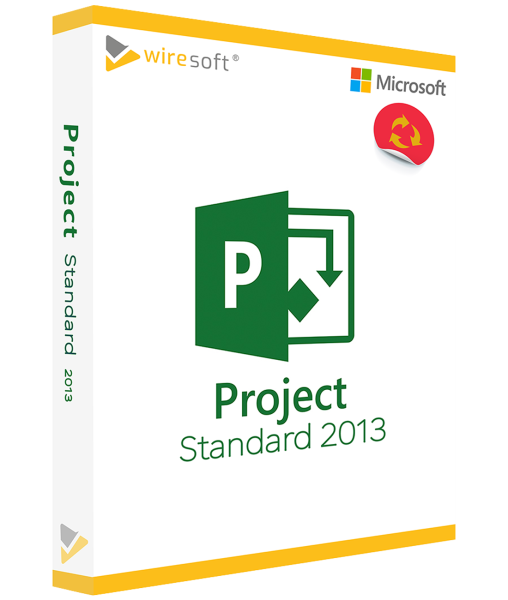 MS Project Standard 2013 is a popular edition of Microsoft software solution for recording, planning, as well as administration and documentation of various types of projects, not only in companies of small and medium size, but also by freelancers: the program offers all the necessary functions and tools to define and delegate the typical tasks in project management. Even such inexperienced users can quickly use this project management software, who are already familiar with the user interface known from Office. Moreover, in addition to its clear arrangement, all features are intuitively easy to use.

MS Project Standard 2013 is a popular edition of the Microsoft software solution for recording, planning, as well as the administration and documentation of the most diverse types of projects, not only in companies of small and medium size, but also by freelancers: The program offers all the necessary functions and tools to define and delegate the typical tasks in project management. Even such inexperienced users can quickly use this project management software, who are already familiar with the user interface known from Office, moreover, in addition to its clear arrangement, all features are intuitively easy to use.

The tools available in MS Project Standard 2013 are used for secure planning and control of resources, deadlines and budgets for the successful implementation of the recorded projects. In addition, numerous automations in Project 2013 Standard simplify project planning, so that bottlenecks in resources and deadlines are detected and eliminated in time. The display of projects in a timeline provides a better overview, especially for complex projects, and individual task paths can be highlighted so that all team members can quickly gain insight into the current status. In addition, many evaluations can be created in Project 2013 Standard in the form of informative reports on the status as well as on results and resources etc. for effective communication with all those involved and these can also be further used in Office applications such as Word and PowerPoint.

For which users was Project Standard 2013 developed?

MS Project 2013 in StandardEdition is designed to meet the needs of project managers who develop and manage projects independently or in SMEs. The extensive functions and features integrated in Project 2013 Standard offer all the possibilities that arise in typical project management tasks: from the creation of project schedules, resource and cost planning to the management of all individual tasks and reporting.

This single license for Microsoft Project 2013 Standard edition is available from Wiresoft as used software in the form of a purchase version, making its price particularly favorable, so that its purchase also offers an economic advantage for self-employed persons and freelancers. In addition, Project 2013 is supported by Windows 7, so that the purchase of a more up-to-date operating system is not necessary to use the software.

In addition to other Project editions and newer versions, you can also find other Microsoft applications such as operating systems in the Wiresoft Software online shop - always as used software and therefore at favorable conditions. The following overview presents the most important features of the Project 2013 Standard edition.

The main goal of MS Project 2013 Standard Edition is to make the planning and execution of projects clear and simple in every phase right from the start. This already starts with the creation of a new task: With the Project Center integrated in Project 2013, users can create a new project in just a few steps, even without much prior knowledge. To do this, they also choose from many predefined templates and import the relevant information, e.g. from Excel. Project managers who are already familiar with Project 2013 can also create an empty project with an unfilled Gantt chart or open an older project for this purpose. Many intuitively usable features and tools enable the differentiated identification of all resources as well as the exact tracking of the project progress, including the creation of reports for all decisive phases. In addition, the optimized desktop interface allows users to quickly capture all essential information, so that they always have an overview of all details.

One of the central tasks of project management is the clear administration of all available resources. In MS Project Standard 2013, the two views "Resource table" and "Resource information" are available for this purpose.

For the exact entry and definition of the respective resource type, in addition to the exact specification of the resource name, an e-mail address for direct communication - also via Lync, if used -, a separate login account as well as a code for identification, and also a free text field for resource allocation can be used. Furthermore, under "Booking type", a distinction can be made between committed and scheduled resources, which defines the respective availability in more detail, in addition to further input options for costs or budget and material - here, further options for additional specifications such as "Generic", "Active" or "Inactive", etc. are available.

In addition, Project 2013 Standard allows further differentiation between resources that are available to the entire company - so-called "enterprise resources", which are managed by an administrator - as well as local resources, which can only be used by a specific project manager, and generic resources for the more precise definition of individual skills.

To make it easier to plan resources, especially for large numbers of projects, Project 2013 Standard provides various automations that simplify project planning. For example, the program indicates when a resource is allocated to two simultaneous tasks. All changes made within a project automatically affect all other components affected by them.

With the timeline view, project managers can keep track of more complex and long-term processes with MS Project 2013 Standard. The Gantt bar chart provides a differentiated snapshot of the current status, showing the most important tasks and milestones; this can also be used for reporting.

Individual task paths in a Gantt chart can be highlighted for clarity using the "Task Path" menu of the same name on the task bars. By clicking on a specific task, the respective paths are displayed in their own color to make them stand out from the others.

Both during an ongoing project and after its completion, the creation of informative reports is one of the Standard-tasks in project management, to document the current status, as well as to describe important phases, or  to use the representation of the entire project progress as a template for future similar tasks. Dynamic burndown reports can also be written in MS Project Standard 2013, showing planned as well as completed phases and work in a line graph alongside the baseline plan, showing at a glance whether the schedule for the project in question is being met.

Microsoft Project 2013 includes matching report templates for all types of reporting, as well as table format templates and tools, views, drawing and charting tools, and more, to document key baseline values such as duration, work, costs, and dates in varying depths as needed.

Reports created for an ongoing project are automatically adjusted and thus always contain up-to-date information. In addition, a split view is also available in Project 2013 Standard to observe or control how the report changes as the data is updated in real time.

supported. However, Microsoft Project Standard 2013 is not compatible with Microsoft Office 2016! The following minimum requirements apply:

The Standard Edition of MS Project 2013 is offered in the Wiresoft online shop as a single user license - as used software, its price is significantly lower than comparable new software - although this marking does not imply any limitations in its functional scope, as software is not subject to wear and tear; moreover, such older versions of Microsoft software are hardly ever offered in regular trade.

This single user license of the Standard edition of MS Project 2013 in the form of so-called used software was created by breaking up a volume license and converting it into individual licenses of the same program that was previously purchased and possibly used by a company or organization. Thereby, this splitting of the underlying volume license does not result in negative effects such as a restriction of usability, nor does it mean a legally unauthorized process; All licenses offered by Wiresoft as used software for Microsoft Project 2013 as well as for other Microsoft programs originally come from companies, therefore the valid case law also applies: This clearly clarifies that the purchase or sale of used software represents a legal process, which has been confirmed by various legally binding court rulings. Thus, a possible liability risk for you as a buyer is reliably excluded, Wiresoft used software is also audit-proof due to the complete documentation of the buyer and seller chain.

The offered purchase version of MS Project 2013 Standard offers besides clearly lower sales price also the advantage of the temporally unlimited usability, since thereby no subscription with additional costs is connected. Thus, your software purchase from Wiresoft is a safe deal that offers you only advantages! In addition to the particularly favorable advantage price of a license of MS Project 2013 Standard, you also benefit from the secure instant download including the immediate license activation with the included valid volume license key.