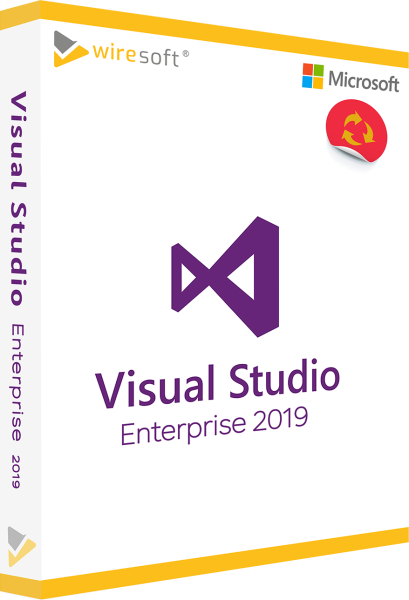 Visual Studio is Microsoft's proven integrated development environment for designing and deploying complex enterprise applications for many fields. Especially the Enterprise Edition of this end-to-end solution convinces with its wide range of tools and features - not only for designing, but also for the ongoing review of the developed programs - and is therefore particularly suitable for larger companies and organizations and therefore also for entire teams of programmers.

Visual Studio Enterprise in the new 2019 version features many improvements in detail as well as completely new functions that make the everyday life of developers easier; these include IntelliCode with AI-based solution proposals and Visual Studio Live Share with practical tools for better real-time collaboration.

Visual Studio Enterprise 2019 also features improved refactorings and navigation, as well as a debugger with several new features. And Live Unit Testing lets you run tests as you write code, while Live Dependency Checking in real time ensures that your code is compatible with your dependency rules.

By purchasing Visual Studio 2019 Enterprise Edition as pre-owned software from Wiresoft, users have the great advantage of being able to use this developer software, which is offered by Microsoft exclusively as a volume license, as their own individual license on their PC.

In addition to the proven features and tools, Visual Studio 2019 also includes a number of practical additions and optimizations to basic functions as well as completely new functions that provide developers with even better programming support.

Many familiar search and filtering features have been optimized for the Visual Studio 2019 Enterprise version, allowing developers to save even more time and work more efficiently:

C# now offers several new refactorings that make organizing code much easier; among other things, members can be moved to the interface or base class, namespaces can be customized to match a particular folder structure, and Foreach loops can be converted to LINQ queries. Suitable suggestions are listed in the "light bulb".

The function for automatically reformatting source code with Code Cleanup is displayed in Visual Studio 2019 as a broom icon below the Source Code Editor and is available with a single click. The settings of the .editorconfig files are also taken into account. Code Cleanup also has a new integrity indicator and a new Cleanup command to find a group of classic errors. Warnings or suggestions can be displayed with a single click and implemented immediately. Frequently used fixes can also be saved or configured as a profile.

IntelliCode is the evolution of the previous IntelliSense auto-completion. While it displayed the available properties and methods in an alphabetically sorted list, IntelliCode displays the most likely methods and properties at the top of the list and marks them with an asterisk.

IntelliCode is based on Microsoft's analysis of over 2,000 open source projects on GitHub, but users can also use their own projects to train IntelliCode and get suggestions based on this. The analysis data is transferred and processed in the cloud, but not the source code.

Live Share in Visual Studio 2019 allows up to 30 users to collaborate on the same source code base by sharing a code base and its context with other team members. This works because Visual Studio Live Share does not transfer an image, only a file tree and context information. This means that each participant remains in their familiar environment and can edit certain parts of the source code independently of the host. Live Share also offers the possibility of joint debugging.

Speaking of debugging: The debugger in Visual Studio 2019 Enterprise is now twice as fast as in the previous version, and the memory consumption when debugging out-of-process C++ applications has been significantly reduced.

Xamarin for for Mobile Developers

Xamarin is now available in Visual Studio 2019 Enterprise. In addition to the space-saving installation size of 7 GB instead of the previous 21 GB, Xamarin also offers shorter compile and deployment times for Android. It also includes a property editor for Xamarin.Forms XAML properties and an improved Xamarin.Forms Previewer.

In particular, Visual Studio 2019 Enterprise offers some features that are not included in any other edition:

The following requirements apply generally to the installation of Visual Studio 2019 Enterprise, but may be higher in some cases:

The Visual Studio 2019 Enterprise software is normally only offered by Microsoft as a volume license. In the Wiresoft online shop you can also buy the Enterprise Edition as a single license - at a particularly favorable price as so-called used software.

Software purchase at Wiresoft - always safe for you! This edition of Visual Studio 2019 Enterprise available in the Wiresoft Shop does not only convince with its particularly favourable price, but also offers security when purchasing by immediate download and activation of the license with the included valid volume license key.

Every purchase of Visual Studio 2019 Enterprise or any other program as used software in the Wiresoft Software Shop does not pose a legal problem, because trading with used software is clearly allowed by law, which has been confirmed by numerous legally binding judgements.

Used software such as the Visual Studio 2019 Enterprise Edition as a single license offers our customers an inexpensive opportunity to use exclusive program editions themselves. You too can benefit from our low-cost Microsoft software offer!