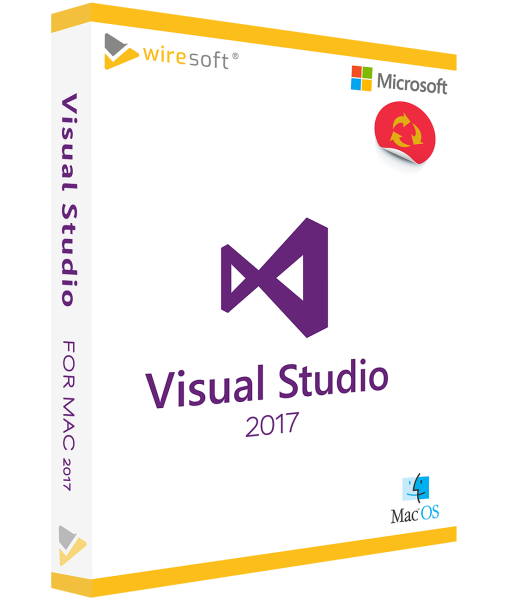 Visual Studio 2017 for Mac in the Professional Edition provides users with powerful features and productivity enhancements for the IDE to create cross-platform apps for macOS, Android, iOS, tvOS, or watchOS - both mobile and Desktop, as well as the web and Cloud - with all the tools needed for development, debugging, and refactoring, including graphical designers, code completion features, source code management, and version control. Microsoft.

Visual Studio 2017 for Mac in the Professional Edition offers users powerful features and productivity enhancements for the IDE to create cross-platform apps for macOS, Android, iOS, tvOS or watchOS - both for mobile and Desktop as well as for the web and the Cloud - the Microsoft program includes all the tools for development as well as debugging and refactoring, including graphical designers, code completion features as well as source code management and version control.

In addition to older developer languages such as C and C++ and more current variants such as C#, Visual Studio for Mac 2017 naturally also supports Apple Metal, iOS, JavaScript and other common web standards. The integrated live support for the respective languages speeds up code writing, just as the debugging functions reduce the time spent on app development. The quick view of the structure allows developers to easily find their way around the structure of a code, while a central error list uses live analysis of the code to list compilation and building bugs as they are entered, as well as domain-specific issues for some languages.

Not only have frequently key features such as IntelliSense, CodeLens and refactoring been improved in Visual Studio for Mac Professional 2017, but also code navigation and code correction, which also make developer work easier, since, among other things, changes to the code, references, etc. are also immediately highlighted in the editor.

For which users is Visual Studio 2017 for Mac Professional intended?

What does Visual Studio 2017 for Mac offer?

Ready at program startup, the 2017 edition of Visual Studio for Mac differs from the previous version by reduced boot times as well as faster startup during sessions and when loading solutions. The recognition of templates for projects and elements is also faster than before.

Brief overview of the IDE for macOS

Visual Studio for Mac features distinct, clearly separated sections for managing applications, settings, and creating as well as debugging code: The toolbar integrated on the welcome page provides direct access to search for recently opened solution folders, as well as functions for opening and creating projects and app configuration, and also for viewing errors. Also present here is a news feed with new information for developers.

Languages and developer types supported in Visual Studio 2017 for Mac

VisualStudio 2017 for Mac, like the Windows version, supports many of the file types integrated there, such as .csproj, .fsproj and .sln, as well as EditorConfig. Specifically, Visual Studio 2017 for Mac supports development types such as ASP.NET Core web applications using C#, F#, .NET Core console applications using C# or F#, and pages created with Razor, as well as JavaScript and TypeScript. Furthermore, this includes cross-platform Unity applications or games in C# as well as Android, iOS, tvOS and watchOS applications in Xamarin with C#, F# or XAML and also Cocoa Desktop apps in C# or F#, in addition to web standards such as HTML, CSS and JSON. This allows Mac developers to always work in the integrated development environment that best suits their needs at any given time.

Many of the Windows-Version are also included in the Mac version, including the Roslyn compiler platform used for refactoring and IntelliSense, MSBuild for the project system and build engine, and TextMate for the source editor. Mac User can also use the same engines for debugging Xamarin and .NET Core apps, as well as identical designers for Xamarin.iOS and Xamarin.Android.

Source code management in Visual Studio 2017 for Mac with Git

VisualStudio 2017 for Mac offers two systems for source code management: In addition to Subversion, this is primarily Git, the freely usable Standard has been integrated into this program version, which also allows multiple developers of a team to work on projects simultaneously. Repositories can be accessed in Visual Studio 2017 for Mac be managed directly via buttons integrated into the IDE, thereby transferring and publishing code for a Git-Service. New features in Push and Commit, as well as SSH support, expand the possibilities in the IDE to use Visual Studio 2017 for Mac for Git tasks.

The CodeLens feature is specifically designed to allow developers to instantly keep track of everything at any point in a project, even without having to leave the code to do so. With CodeLens, they can easily navigate directly to individual functions. In addition, CodeLens not only displays all changes to the code in the editor, but also names the last developer who adjusted something and also indicates whether a test was passed at a certain point.

Refactoring is one of the Standard tasks when developing code to improve it afterwards without changing its behavior. Visual Studio 2017 for Mac Professional offers besides context actions and source analysis further refactorings, such as overwriting, adding parameters (e.g. NULL checks) and arguments, also literals can now be edited, on the one hand by inserting digit separators and especially for numeric literals also by changing the base from "hexadecimal" to "binary". In addition, Visual Studio 2017 for Mac offers the option of converting if-statements to switch-statements and removing unused variables.

Visual Studio for Mac 2017 uses Mono's soft debugger for error removal, this is integrated into the Mono runtime to debug code managed on all platforms. Furthermore, the software has a native debugger for Xamarin.iOS, Xamarin.Mac and Xamarin.Android based apps. Included for this purpose are extensive quick views for special types, such as sizes, coordinates and Bézier curves, as well as strings, colors and URLs.

Specifically for Xamarin applications, Visual Studio 2017 for Mac features the Xamarin Forms Previewer; this allows developers to instantly check the impact of a line of code on an application in a live preview. Also included for Xamarin Forms are enhancements to IntelliSense for XAML, including support for bindings, converters, as well as properties, controls, etc.

Instant control with IntelliSense in Visual Studio 2017 for Mac

The IntelliSense feature automatically completes APIs as they are typed via IntelliSense completion lists available for this purpose, which has the advantage of making developer processes not only faster, but also more accurate. IntelliSense also allows APIs to be analyzed more quickly in general by allowing the set of values to be narrowed down using categories. To this end, the tooltips make it easier to examine API definitions, indicating problems as they are entered and marking the appropriate places with a wavy line.

Other benefits of IntelliSense include filters to remove certain unneeded members from the completion list. Specifically, IntelliSense completion lists for C# have tokens such as "complete word" or "list member" and also provide quick access to, among other things, members of a particular type, code snippets, and the names of variables, functions, and commands.

Hardware and other requirements for Visual Studio 2017 for Mac

The minimum requirements listed below apply to installing and running Visual Studio 2017 for Mac; for Xamarin.iOS and Xamarin.Mac projects, additional operating system requirements may apply:

These licenses of Microsoft Visual Studio 2017 for Mac as well as all other single software licenses offered at Wiresoft are exclusively from companies located in Europe and therefore subject to EU law. Every used software purchase of Visual Studio 2017 for Mac Professional or any other Microsoft program in the Wiresoft software store does not represent any liability risk for our customers, because the trade with used software is expressly permitted by law, which has also been clearly confirmed by corresponding court rulings. In addition, used software from Wiresoft is also audit-proof!

Software purchase with Wiresoft is therefore always a safe purchase for you! This license of Visual Studio 2017 for Mac Professional offered in Wiresoft store offers to besides the great advantage of their an absolutely favorable price also security with the purchase by instant download and license activation with the included valid volume license key.

In addition, the single license of used software such as Visual Studio 2017 for Mac Professional offers buyers an economical alternative to the usual new software offers and provides the opportunity to use exclusive program editions - even in older versions. Therefore, you too can benefit from our favorable offer of used software for Microsoft products!