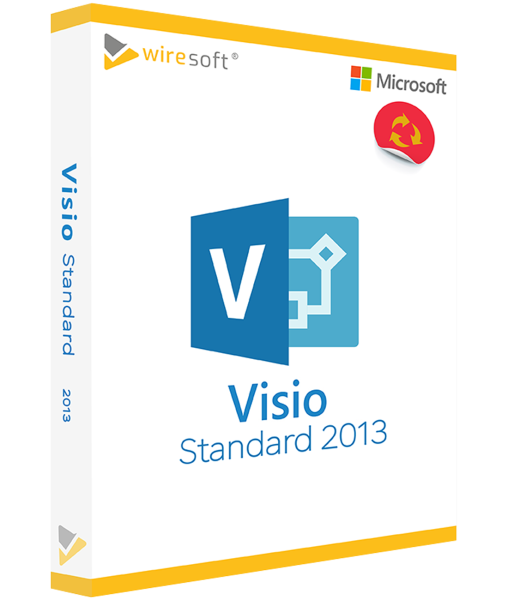 Visio Standard 2013 offers a wide range of templates for the creation of diagrams in many business areas: thus, both technical and business processes as well as scientific structures can be visualized in a differentiated manner. Thus Visio Standard 2013 is suitable wherever complex facts and processes as well as organizational structures are explained by a graphical representation.

All diagram types are clearly arranged according to templates for the respective area of application and can be filled with information according to your own needs or further adapted with shapes via drag & drop.

Users can easily find their way around Visio 2013 Standard via the familiar desktop interface from the Office programs. In addition, the integrated tools can also be used intuitively here to immediately convert specifications or ideas into informative diagrams.

For which user groups is the Visio 2013 Standard Edition intended?

This Standard edition of MS Visio 2013 already offers all the prerequisites to be used for creating sophisticated visualizations in diagram form - in completely different areas and always at a professional level, as both SMEs and self-employed people expect. The basis of the Visio program here are the shapes, which are clearly organized in templates depending on the area of application, they can also be further customized according to your own requirements and saved so that they are available again as new templates.

Another advantage of Visio 2013 Standard Edition is its broad compatibility, which ranges from Windows 7 to Windows 10, making this version particularly attractive for those users who still work with an older operating system and are not dependent on updating their existing Microsoft programs to use this software.

The Standard-Edition of Microsoft Visio 2013 is available in the Wiresoft Software Shop as a single license in a purchase version - as so-called used software, which has arisen from the dissolution of a volume license, thus this also has a significantly lower price compared to new goods. Used software licenses from Wiresoft represent a particularly economical solution for user groups such as SMEs and the self-employed to use professional Microsoft software such as Visio 2013 themselves.

In addition, they can find many other Microsoft applications in the Wiresoft Software Online Shop, including Windows operating systems that are compatible with Visio 2013 - always as low-priced used software single licenses. The following overview presents the most important features and tools of Visio 2013 Standard Edition.

Visio Standard 2013 has a wide range of Standard diagrams suitable for visualizing typical projects as well as order structures and processes common to most business areas. These include the following types of diagrams:

Furthermore, types such as maps as well as floor plans, network diagrams, and software and database diagrams are also available - especially those of the Unified Modeling Language (UML) type, the widely used standard method for visualizing software models and designs, including varieties:

All these templates can be enhanced or extended in Visio Standard 2013 using the existing shapes or using custom shapes created by the user and can also be saved as custom templates.

Basic information about the structure of Visio 2013 Standard

Visio 2013 Standard, like any other Visio software, is organized according to a modular principle so that users can quickly find their way around it. This means that even the inexperienced can create diagrams immediately and with relative ease.

The basic elements are the so-called shapes - predefined drawing objects - from which a diagram is composed. Such a shape component is dragged onto a new drawing sheet using Drag&Drop this is a copy of the master shape. Depending on how many such shapes are needed, they can be dragged from the master shape. In Visio, these copies are called instances, in contrast to the master shapes.

The copied shapes can now be further edited by various existing selection points - e.g. rotated, changed in width and height, scaled or also connected to each other by arrows etc., likewise text can also be inserted and the color, line width or contour can be adjusted.

Certain types of shapes are always combined in Visio 2013 in so-called templates, which are shape collections that belong to a certain diagram type. The same shapes can therefore appear in different templates. This has the advantage that, depending on the selected diagram type - e.g. a standard flowchart - all the required shapes are contained in the template in question, but also in the other templates that are intended for the creation of completely different diagrams, but in part use similar shapes.

To create a diagram of a certain type, users can now simply call up the appropriate template and get started - another option is to simply open a corresponding template that already contains some kind of basic structure of a diagram, and further edit it with the shapes contained in the associated template, which is opened at the same time. For example, in the "Organigram" template, all the appropriate shapes are available: these include, among others,  frequently occurring positions such as "Consultant", "Manager", "Managing Director", and so on. These can then be further modified or supplemented with your own shapes.

It is also possible to save a completed diagram in Visio 2013 so that it is available the next time the program is opened. The Visio files of type .vsd can also be used in other Microsoft programs via drag & drop, including PowerPoint, where they can be used as part of a presentation. It should only be noted that files created with Visio Standard 2013 are not compatible with more recent Office programs.

The desktop view of Microsoft Visio 2013 Standard looks immediately familiar due to its visual orientation to the Office-programs. In addition, it offers a whole range of improvements, enhancements and new functions compared to the previous version:

Important note: The Visio 2013 version is not compatible with Microsoft Office 2016!

The Standard Edition of MS Visio 2013 is offered in the online shop of Wiresoft in the Standard Edition in the form of a single-user license at a low price as used software, thus the price is significantly lower than the corresponding new product - whereas here in the regular trade almost exclusively only the last software version is offered. In addition to its significantly lower purchase price, the purchase version of Visio available from Wiresoft offers an economic advantage due to its unlimited usability for an unlimited period of time, because it is not a subscription version that contains contractual obligations with chargeable updates.

The basis of the offered single user license of Visio 2013 Standard Edition is a volume license of this Microsoft program, which was originally purchased and possibly also activated by a company. With the legally permissible resale or acquisition by Wiresoft, this volume license was split and converted into individual licenses; the resulting individual licenses will be referred to in the future as used software.

However, neither the splitting into individual licenses nor the new designation of Visio 2013 as "used software" means any restrictions with regard to the scope of functions or the time of use - on the one hand, because software generally cannot wear out, and on the other hand, because this process does not violate any valid provisions.

Buying software with Wiresoft is therefore always a safe business, because all offered used software licenses, such as the Standard Edition of Microsoft Visio 2013, come from companies based in Europe, so that the underlying business transactions are governed by the legislation in force in the EU, which clearly states that the resale of used software is permitted by law. This is also clearly confirmed by various court rulings, so that a liability risk for you as a buyer is also reliably excluded. In addition, the software you have purchased from Wiresoft is also audit-proof due to the complete proof of the previous buyers or sellers.

Buying software from Wiresoft therefore only offers you advantages! When you buy a used software license of MS Visio 2013 Standard or another program, you not only benefit from a price advantage compared to new products, but also from buyer security through immediate download as well as immediate license activation with the volume license key that is exclusively valid for your purchased product after the payment process has been completed. In addition, Wiresoft's used software offer gives you the chance to use exclusive Microsoft program editions yourself and without restrictions.

In the Wiresoft Shop for Microsoft used software, you will therefore not only find other versions or editions of this program in addition to MS Visio Standard 2013, but also many other Microsoft applications that are compatible with this program version, e.g. Windows operating systems and Windows server operating systems. If you have any questions about MS Visio Standard 2013 or any other Microsoft software available in the Wiresoft Shop, simply take advantage of our competent, friendly advice - via chat or telephone or e-mail.