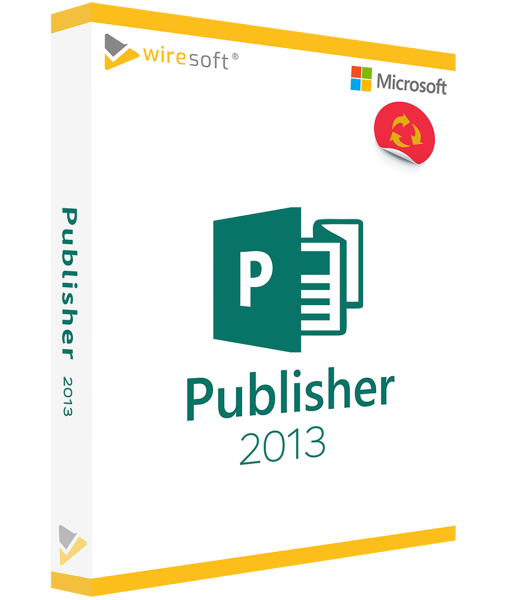 Publisher 2013 - the Microsoft DTP standalone program as a purchase version

Publisher 2013 is an older version of the versatile DTP program from Microsoft to professionally design interesting-looking publications for any purpose: To this end, Publisher offers a large selection of template documents for all typical uses as well as intuitively usable functions that can be used to create visually appealing and, at the same time, printable advertising materials in both the business and private sectors: In addition to invitation cards and flyers, business and serial letters, mailings as well as presentations, reports and brochures or even larger catalogs can be designed - just to name the typical formats that are already included as templates.

The easy-to-understand and easy-to-use tools in the tabs, which are clearly structured according to specific functional areas, support users from beginners to professionals with practical tools and features that also facilitate image editing, for example - combined in a typically user-friendly Microsoft user interface for efficient work. Publisher therefore makes the expensive purchase of another DTP program unnecessary, and the software can also be used quickly by inexperienced users.

The Publisher 2013 version again offers a number of practical additions and new functions that make designing publications even more intuitive:

MS Publisher 2013 is only available as a component of certain higher Office-versions and e.g. not integrated in Home & Business and Office 2013 Home & Student. Users of such an edition can conveniently purchase Publisher 2013 from Wiresoft as a standalone program. Since the Publisher 2013 version is also supported by older Microsoft operating systems from Windows XP or later, users who want to continue using this or one of the subsequent versions on their hardware will benefit from buying used software.

In addition to Publisher 2013, you can also purchase newer versions and many other special Office programs at particularly low prices as single-user versions in the Wiresoft online shop. The following overview provides a more detailed introduction and a presentation of the functions and features in Publisher 2013.

The most important innovations of Publisher 2013 at a glance

In addition to optimizations and additions to already included functions, the Publisher 2013 version also offers various innovations, whereby the range of design options has been expanded even more.

Due to the large selection of layout templates, even inexperienced users can already get pretty close to a certain design idea. To find the right template, the search on Office.com can be used. Once the right layout has been found, it can be flexibly adapted further and then saved as a personalised new template so that it is immediately available again for a new publication. In addition, the following general features are available in Publisher 2013, which offer further options for printable design:

In addition, the following functions and features make working in Publisher easier - with new effects and useful tools:

Editing and swapping images in the design area

Some work steps require the simultaneous editing of several images. Publisher then lists or displays them clearly in a separate column in the design area. They can then be dragged and dropped to the desired position in the layout document or exchanged. The new zoom, pan, and crop tools let you edit images without changing the document layout, and the new precise alignment tools let you accurately format and place shapes, images, and text.

Images as design backgrounds on a page open up new design possibilities with Publisher 2013, allowing them to be selected and inserted with precision in just a few clicks. Several options are then available to adapt a photo to the document format: The image can either be expanded or used multiple times as tiles, thereby completely filling the background.

Publisher 2013 offers many new image effects that can be used to add or modify a photo with a shadow, reflections, but also various glow effects as well as soft edges, bevels and 3D views. Most of these effects are also available for text, allowing you to create documents that stand out from the uniform look of many other print media and attract readers' attention.

When creating multi-page brochures with Publisher 2013, inserting longer text that is also interspersed with images and info boxes is made especially easy by linking the individual text boxes together. This means that the text is automatically distributed across all text frames when it is copied in. If there is still not enough space, this is indicated by a corresponding icon at the respective field. This prevents important text components from being overlooked. This feature is also particularly helpful if texts are still being modified after insertion, because the flow is automatically adjusted flexibly.

To ensure that a document created with Publisher 2013 is also available to other employees for editing or commenting, users can use the Microsoft cloud service OneDrive to store it online; authorized recipients receive access to the document for editing via a link, which also makes the storage particularly secure and protects data from loss. OneDrive offers reliable real-time updates and high security standards for efficient collaboration.

The Office program Publisher 2013 is available in two versions: 32-bit and 64-bit. Depending on this, individual hardware requirements differ - for example, for the working and hard disk space. The following minimum computer requirements apply:

MS Publisher is a fixed component of certain MS Office editions - in Home & Business and Home & Student, however, the program is not included. In the Wiresoft online shop you can also buy Publisher 2013 individually as used software - in contrast to many other dealers who usually only offer the latest version. Your further advantage: The single user license of Publisher 2013 offered here is also not a time-limited subscription version, but belongs to you after the purchase. Thus, the software purchase of Publisher 2013 at Wiresoft is worthwhile for you twice!

Every software purchase at Wiresoft is not only particularly favorable for you, but also secure: The Publisher 2013 single-user license, which you purchase as used software, originates from a former volume license of a larger company, which is, however, completely identical in its range of functions to the Publisher 2013 program, which is also included in certain Office 2013 packages. The splitting of the volume license and the resulting labeling as Used Software therefore has no effect on its functionality, and furthermore, software is not subject to wear and tear.

With your purchase of Publisher 2013 used software, you are therefore not taking any legal risk with Wiresoft, because the trade in used software is expressly permitted by law, which has been confirmed several times by various court rulings.

This Publisher 2013 used software can be installed on your PC after the purchase process and download is complete and can be activated and used immediately with the supplied multi-activation key (volume license key).

Buying used software from Wiresoft is an economically advantageous solution for our customers to be able to use either older program versions or Microsoft programs that are normally not available individually. Many companies already use the used software offer of Wiresoft, but also freelancers and private users appreciate the large selection of program versions - and save money when buying!

In the Wiresoft Software Shop you will find not only this but also older versions of Publisher 2013 as well as many other Office used programs on sale. If you have any questions about MS Publisher 2013 or any other Microsoft program, simply use our competent advice by e-mail, phone or chat.