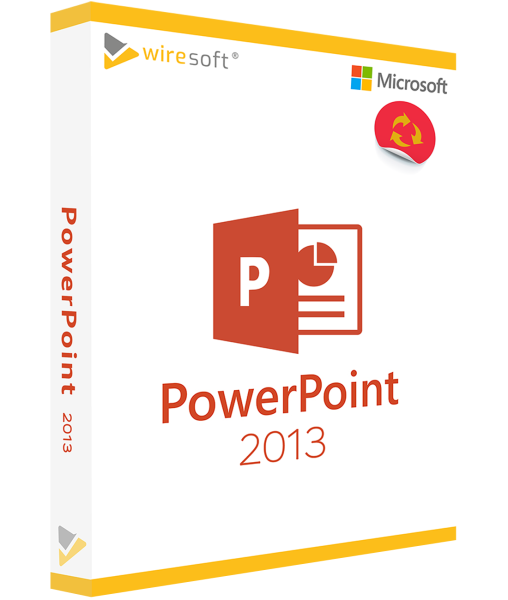 Microsoft PowerPoint 2013 - the classic Office as a stand-alone program

PowerPoint is a typical component of the Microsoft Office and is indispensable for the creation of convincing presentations, which can be given live or via video as a lecture, in order to clearly convey information to colleagues and business partners. The PowerPoint 2013 version convinces with its versatility of application possibilities. It can be used not only in the workplace, but also at school and university to communicate successfully with other people. With its wide range of templates and design elements, PowerPoint 2013 supports beginners and professionals alike in creating clearly structured slides and communicating topics in a lively manner.

The user-friendly interface of Microsoft PowerPoint 2013 makes it very easy to get started with the program, especially for inexperienced users. Intuitively usable tools and a large selection of standardized slide templates and graphic types facilitate the creation of professional-looking presentations and also give them an individual look. Intelligent guide lines help users to place the individual design elements optimally and accurately, and the live view allows the current editing status to be checked immediately at any time.

PowerPoint 2013 also offers support for tablets, which significantly expands the program's application possibilities. For team use, comment columns have also been integrated in this version, so that other employees can add their comments to the slides of a presentation.

The PowerPoint version 2013 has the advantage over newer editions that it runs on Windows 7 operating systems or Windows Server 2008. Therefore, the software can still be used on older computers - which is an economic advantage especially for private users as well as self-employed persons or students, but also for smaller companies that are looking for a financially advantageous solution to cover their software needs without having to renew their hardware.

PowerPoint 2013 already has the option of using the Microsoft SkyDrive cloud service to store presentations online so that they are available to other users; via SharePoint they can be shared and edited by other users.

The PowerPoint 2013 program is also available from Wiresoft as part of the corresponding Office, but you can also buy it separately from us!

The purchase of PowerPoint 2103 as a single program from Wiresoft has the advantage, in addition to the low price, that it is not a software subscription, but a purchased version. The following overview presents all important features and tools of this proven Office.

In addition to PowerPoint 2013, you will also find older and newer versions of the software in the Wiresoft online shop - also as a low-priced single-user version without subscription obligation.

Use practical functions and features in PowerPoint 2013

PowerPoint 2013 extends the previous scope for the graphic design of presentation slides. The following tools and features, among others, are available for this purpose:

In addition, PowerPoint 2013 also offers other practical functions that further increase the scope of possible applications - both for collaboration and especially for the presentation itself:

The PowerPoint software is a regular component of Microsoft Office. For this reason, the program is not available separately in regular stores, but is only offered together with the other Office. At Wiresoft you can buy PowerPoint 2013 as well as other versions of this software completely separately as a single program.

Your big advantage when buying software with Wiresoft is this: The offered single user license of PowerPoint 2013 is a pure purchase version, which therefore neither obliges you to a long-term and possibly more expensive software subscription, nor does it mean the usual obligatory updates or temporary restrictions in the use of the functions. For this reason, buying the software from Wiresoft is even doubly worthwhile, especially if you do not want to use the other programs of the Office 2013. This way, not only private users, but also self-employed persons and SMEs benefit from all advantages of MS PowerPoint 2013 and save money.

Your software purchase with Wiresoft is in any case also a safe thing: This PowerPoint 2013 single user license, which is offered for sale in our software shop, comes from a larger volume license, which is normally only used in companies, therefore it is a so-called used software - one reason for the particularly favourable price at Wiresoft! However, this does not mean any disadvantages for you, because the used PowerPoint software license you purchase is completely identical to the PowerPoint 2013 program, which is also included in the Office Suite 2013 of the same name.

You can also be sure when buying software with Wiresoft that neither we nor you yourself are in a legally unclarified situation when using used software, because: The trade with used software is absolutely legal and judicially allowed!

Every Microsoft program that originates from such a volume license and is offered at Wiresoft has been tested by Wiresoft beforehand for its flawless and unlimited usability, so that PowerPoint 2013 can be used by 100% of you after your purchase and activation by the license key supplied.

If you have any questions about PowerPoint 2013 or another MS program, please use our competent advice by e-mail, phone and chat.