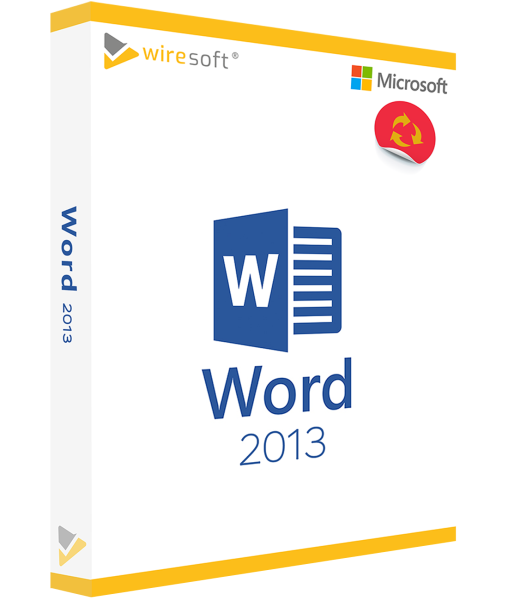 With Microsoft Word 2013 users have an extensively revised version of the classic software for word processing at their disposal - for the professional creation of documents in the office as well as at school, in studies or in the private sector. The large functional range of Microsoft Word 2013 made it easy for experienced User as well as beginners to compose clearly structured continuous texts, letters, but also other types of written documents without prior knowledge in the twinkling of an eye. A comprehensive portfolio of practical features, supports users in the text creation, such as the automatic spell check or the tools for formatting, including many templates. The intuitive and user interface of Microsoft Word 2013 is also particularly user-friendly and makes its immediate use especially easy. Due to its compatibility with Windows 7, MS Word 2013 can also be used on many older PS.

Microsoft Word 2013 provides users with a comprehensively revised version of the classic word processing software - for the professional creation of documents in the office as well as at school, at university or in private life. The wide range of functions of Microsoft Word 2013 made it easy for both experienced users and beginners to write clearly structured continuous texts, letters, but also other types of written documents without previous knowledge in no time at all.

An extensive portfolio of practical features, supports users in text creation, such as automatic spell checking or formatting tools, including many templates. In addition, the intuitive and user interface of Microsoft Word 2013 is particularly user-friendly and makes it easy to use immediately. Thanks to its compatibility with Windows 7, MS Word 2013 can also be used on many older PS.

In addition to the tools familiar from earlier Word versions, which have been optimized, Word 2103 offers a particularly clear arrangement of all available text options in the revised ribbon. Supplemented by many new functions and features, which among other things improve the readability and also support the joint work on texts in the cloud, the software also offers the use on tablets and smartphones via touch-optimized operation.

Word 2103 is available from Wiresoft - particularly practical - as a single program for single users. With it you receive Word with the same functional range as the program contained in the Office Suite 2013. In the following you will find an overview of the most important features and extensions.

In addition, there are many other functions for integrating images and graphics, concentrated reading, online collaboration and use on touch devices:

Inserting and placing images and graphics in a Word document will be even easier and clearer in the 2013 version with the various layout functions:

With the new reading mode, Word offers a better reading experience in many respects, providing a much better overview:

Word 2013 also supports collaborative work on documents in the cloud. These can be shared via SharePoint or OneDrive and can also be edited jointly by several users simultaneously. When synchronizing changes to a jointly edited document, the changes that were saved first are applied directly. In the case of subsequent changes by another user, the corresponding text passage is highlighted and the versions are then merged by saving them again. In the event of a conflict, Word points this out in and supports users in resolving the problem manually. The online functions also include the integration of social media. The following functions and features are available in word 2013:

Word 2013 can also be easily used on tablets and Windows 8 smartphones. All users need to do is activate the finger-tip mode in the toolbar for access, which also allows them to enlarge the display of the interface elements and set more space between the individual buttons and commands.

Word 2013 is available for download in two versions: 32-bit and 64-bit. Individual hardware requirements may differ.

Word is a typical integral part of every Microsoft Office, so it is usually not available separately. At Wiresoft, however, you can buy MS Word 2013 as a stand-alone program - in contrast to most other software shops - and at a particularly favourable price!

The single user license of Word 2013 offered by Wiresoft is identical to the version included in the Office Suite 2013. Anyone who wants to use Word exclusively without the other Office, such as self-employed persons or smaller companies, can thus benefit from all the advantages of the Word version 2013 - and save money.

In addition to Word 2013, you will also find many other Microsoft software single licenses in the Wiresoft software shop, which you can buy there at a special price. These original Microsoft products were often part of a larger volume license as used by companies. With the resale to us their unlimited rights of use were released again. Thus you as a buyer do not enter a legal grey area. Because every previously installed software, including the corresponding license, was previously deleted, so that it can be freely used again by a new user. Wiresoft as a serious software dealer offers all Microsoft products offered in the online shop exclusively as full versions, which can be used for an unlimited period of time and without restriction in their functions.

Do you have questions about Word 2013 or another Office? Then benefit from our competent advice and contact us simply by e-mail, telephone or chat.