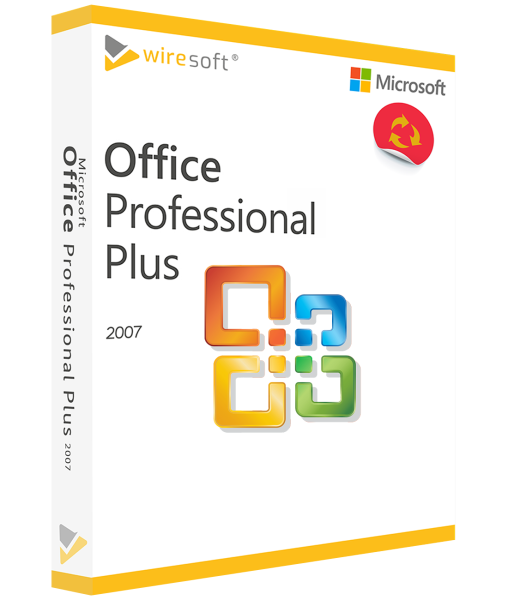 MS Office 2007 - and thus also the edition 2007 Professional Plus   - represents a milestone in the history of Office packages: Compared to older versions and predecessors, it offers a Plus of functionality and efficiency, which makes it, with the included programs, an indispensable tool for companies, but also facilitates the efficient completion of all daily office and administrative tasks for private users and self-employed persons: with Word 2007 for the creation of texts in the most diverse formats, Excel 2007 for complex calculations, Outlook 2007 for comprehensive communication and task planning and PowerPoint 2007 for the conception of descriptive reports and presentations. Particularly the Office-Edition 2007 Professional Plus offers in addition a large Plus at further programs: with Publisher 2007 for various possibilities with publications of print media, in addition, for on-line, with Access 2007 for a multiplicity of data base applications and finally also with InfoPath 2007, in order to provide forms for the practical collection and evaluation of data. Buyers of the Professional Plus edition thus benefit from a sophisticated Office version that enables professional work and comprehensive communication.

MS Office 2007 - and thus also the 2007 Professional Plus edition - represents a milestone in the history of Office: Compared to older versions and predecessors, it offers a plus in functionality and efficiency that makes it an indispensable tool for companies with the programs it contains, but also makes it easier for private users and self-employed persons to efficiently handle all daily office and administrative tasks: with Word 2007 for creating texts in a wide variety of formats, Excel 2007 for complex calculations, Outlook 2007 for comprehensive communication and task planning and PowerPoint 2007 for designing clear reports and presentations. The Office 2007 Professional Plus in particular offers a large number of additional programs for this purpose: with Publisher 2007 for a wide range of options for publications from print media, but also for online, with Access 2007 for a large number of database applications and finally also with InfoPath 2007 to create forms for the practical collection and evaluation of data. Buyers of the Professional Plus Edition thus benefit from a mature Office that enables professional work and comprehensive communication.

The Professional Plus Edition offers the following new features in the various programs, among others:

All of these classic Microsoft applications included in Professional Plus 2007 have a completely redesigned look and feel: The previous menu structure of the Office is replaced in the individual 2007 Office programs by a clearly arranged ribbon. The ribbon now offers commands grouped into individual groups for each Office, which are further supplemented by list and dialog boxes. These are then generally available as tabs, which are further subdivided according to context. Thus, all commands or functions necessary for executing a certain action are summarized and are immediately available in one place, e.g. for formatting a Word document according to your own specifications or for inserting and editing a graphic in a document.

Furthermore, the Ribbon also offers the possibility to make user-defined settings in the respective menus and thus adapt them to your own needs, so that frequently used functions are directly available, which also represents a plus in work efficiency.

In addition to this, Office 2007 offers Professional Plus and the other editions the

so-called live preview: Depending on the open program, this feature shows templates and designs in a real-time preview, but also formatting functions in a document window.

With OpenXML, the 2007 Office 2007 version also provides in the Professional Plus Edition a new XML-based Standard that offers a whole range of advantages that are important in the modern business world: For example, XML support reduces the size of files, which saves space on the PC and significantly shortens the time it takes to load documents onto Web pages.

In Microsoft Office 2007, documents that were created with older versions of Office(Office 97) can be opened, edited, and saved again in what is called compatibility mode, which makes them available and editable again for the older Office for Windows and Mac OS. This is achieved, among other things, by the fact that all functions that are not available in the older program version are not available here, so that there are no compatibility problems.

The Microsoft Office Professional Plus 2007 Edition at Wiresoft

For many buyers, the purchase of a 2007 Professional Plus Edition of MS Office has the great advantage that it is still supported by older Microsoft operating systems from version Windows XP SP3 onwards, which is still used on older hardware, so that this broad compatibility is definitely a decisive factor in the purchase decision. On the other hand, this edition is only available in conventional shops as a volume license. At Wiresoft, however, customers can also purchase Professional Plus 2007 as a single license in the form of used software.

MS Office 2007 Professional Plus - all business tools in one suite

In addition to the proven Office Word, Excel, PowerPoint and Outlook, the Professional Plus 2007 edition contains not only the DTP program Microsoft Publisher 2007, but also the database application Access 2007 and the form creation tool InfoPath 2007.

Overview of all programs included in the MS Office Edition 2007 Professional Plus:

In addition to many improvements, Microsoft Word 2007 also offers some new functions and features: Many standard templates are available to immediately create text documents for business as well as private purposes, which are professionally preformatted and can be further customized. In addition, new effects such as transparency and 3D are available to make texts more appealing. Macros can also be created in Word to handle certain text editing steps more efficiently. A big plus is the central administration of versions or changes as well as comments.

This powerful spreadsheet program now offers advanced features for creating formulas and visualizing data, including pivot tables and the ability to create professional, easy-to-read charts in just a few steps. Through the connection to Microsoft SharePoint Services, confidential data remains protected even when communicating with others.

The Slide Master in PowerPoint 2007 is an effective tool for the management of all templates to ensure a consistent appearance of all presentations created with it and to save time. Many new text and typographic effects as well as formatting tools are available for the design, which can usually be applied immediately with just one click.

The integrated Document Inspector reliably removes comments, hidden text or personal information before publishing or distributing a presentation, and the digital signature also ensures that the content cannot be changed. With the newly available Office Open XML format .pptx, presentations created with it can also be published as HTML web pages.

The proven communications software offers effective functions for managing daily e-mail traffic, including instant search, to search e-mails including attachments for specific terms or keywords, to release data and information specifically for individual users and purposes, and a spam filter. Also the writing of messages including formatting has become more intuitive and therefore easier. The integrated task bar with calendar offers many possibilities to coordinate appointments and projects. Content can be highlighted in color and marked according to individual persons or importance, for example.

InfoPath 2007 creates, manages, and exchanges forms for capturing different types of data. Because they are based on XML, they can also be made available on the Web via Office SharePoint Server 2007 with the integrated "Forms Services" and can therefore be filled out without the InfoPath software.

The powerful DTP program is designed to immediately and easily create high-quality publications for a variety of purposes: from flyers and personalized serial letters to extensive brochures. The templates included in Publisher 2007 include not only print products, but also formats for sending e-mail newsletters and designing websites. Thanks to the comprehensive compatibility with other Office, texts, images and tables etc. from Word, Excel, Access, Outlook and PowerPoint can also be used.

The proven database program is used to centrally collect and structure data from various sources in order to make it available internally within the company itself or externally to customers for further processing. The various format templates allow the information collected to be better analyzed and used and also presented in an understandable form as meaningful reports.

Office Edition 2007 Professional Plus is compatible with many older Windows operating systems, but is no longer supported by Windows 10. However, the new ribbon interface introduced with the 2007 Office version requires more hard disk space than previous versions. In general, the following minimum requirements apply for the proper execution of all applications:

The 2007 Professional Plus Edition from Microsoft is one of the Office that are only offered in traditional retail stores as volume licenses for companies and are therefore not available there as individual licenses. In the Wiresoft Software Shop you can purchase the 2007 Professional Plus Edition as a single user license without any subscription obligations. When you purchase from the Wiresoft Shop, you will only pay the one-time costs for the full version of this Office, which offers the same range of functions as the corresponding volume license.

The underlying volume license usually comes from a larger company and was purchased from Wiresoft. When purchasing volume licenses, the company also has the right to resell surplus software licenses or even the entire volume license - regardless of whether individual licenses contained therein or the entire volume license was used or not. By selling, the volume license is dissolved and converted into individual licenses, which are then referred to as used software or used software. This separation or designation has no effect on the overall functionality of the 2007Office 2007 Professional Plus Edition that is offered or the programs that are included. Wiresoft then offers these single licenses at a particularly reasonable price as a purchased version.

Your software purchase at Wiresoft is not only inexpensive, but also secure: After successfully completing the purchase process and the immediate download, you can install the Office 2007 Professional Plus software on your PC and activate it with the corresponding volume license key supplied, which is only valid and functional for your personal single license. This is because Wiresoft only sells Office 2007 Professional Plus software or other Office or versions that are identical to original Microsoft products; companies from which these earlier volume licenses originate are located exclusively in Europe, so that the purchase of this Office 2007 Professional Plus Edition as used software does not entail any legal risk whatsoever, because the trade with used software is permitted by law, which has been confirmed by court rulings several times.

The purchase of used software in the Wiresoft Shop is a favourable possibility for you as a customer, otherwise not available Office-editions such as Professional Plus 2007. Our clientele therefore includes SMEs, but also self-employed and private individuals who benefit from our inexpensive range of Microsoft programs.